I say victorious because the Vidalia onion has an unusual history that results from the vegetable’s birth related to the location of its planting and gaining surprising success in spite of its differences. Intrigued? Of course, you are, so read on.

Back in 1931, Mose Coleman, a Georgia farmer in Vidalia, planted a field of onions. When he tasted the onions, he discovered they were sweet, not hot as he had expected. Coleman struggled a little sell his crop, but after some convincing, he sold his first crops for $3.50 for a 50-pound bag, which was actually a very good price for the times. Other farmers weren’t doing nearly so well with their crops. With successful sales came more plantings of the “sweet” onions and the production began to flourish.

In the 1940’s, the state opened a farmers’ market in Vidalia, which was then the crossroads of some major highways. People began to refer to the onions as “those Vidalia onions” and the name was bestowed on this new sweet onion.

With time and research, Georgia agriculture realized that the soil, rain and weather conditions in the southeast of the state were perfect for producing sweet onions. The area has low sulfur soils, which prevents the bulbs from producing the pungent or hot taste that regular onions have. They like a lot of water and this also contributes to their sweetness. Having established that they have a true Georgia treasure, the state legislature declared the onions Vidalia onions and set strict regulations on their production and development. The legislation, passed in 1986, defined a 20-county region of Georgia as the growing area. The Georgia Department of Agriculture trademarked and still owns the name “Vidalia” so the only Vidalia onions come from Georgia.

Since the onions are harvested in spring and summer, that is the only times you are likely to see them in the market. I believe I have seen them now and then at the grocery store, but they are not always available. There are other sweet onions that you can use to make your batter fried onions, but they will have different characteristics. You can substitute Walla Walla onions from Washington state, Texas 1015 onions, Pecos Onions, or Sunbrero from Texas, Imperial Valley Sweet onions from California, Carzalia Sweet from New Mexico, Sweetie Sweet from Nevada, Maui Onion from Hawaii and the Bermuda onion from Bermuda.

Sweet onions are delicious on sandwiches or in a salad, but they also cook up well. They work well with many condiments, such as butter, cardamom, celery, cloves, and curry. They pair easily with mushrooms, asparagus, chiles, broccoli and any other place you might add an onion. The Vidalias bring a sweeter taste than regular onions, but still blend well with most food choices.

Almost any recipe on this site that uses onions in curry or a salad could easily benefit from a Vidalia or other sweet onion. But if you would like to try to make your own “Bloomin’ Onion” similar to the Outback’s, you can try this recipe from Alton Brown at Food Network. I tend to stay away from this because it is so delicious and the carbs are not low. You can make it using a low carb flour, but I haven’t tried it. I may see what I can do about creating “Onion Petals” that are a lower carb’d version, if I can find a Vidalia or even a Nevada Sweetie Sweet onion at the market. 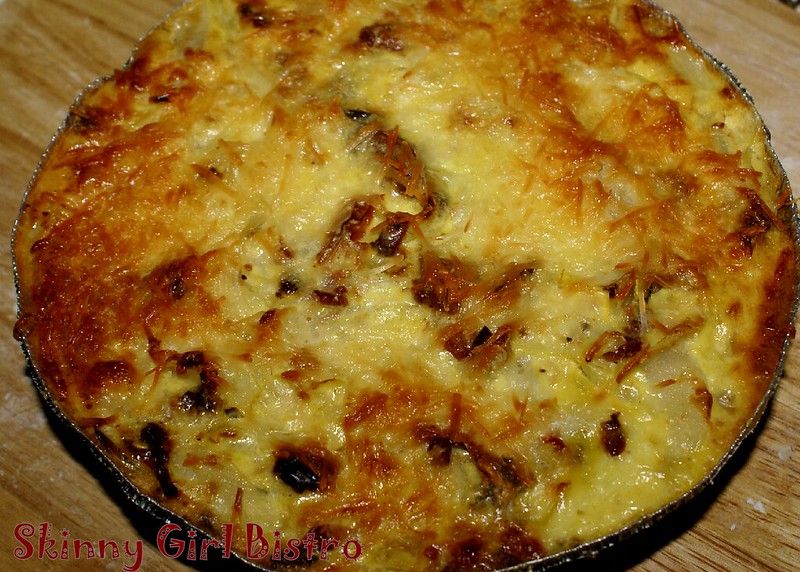 Don’t have Vidalia onions?  You can make these with any of the sweet onions mentioned above.  Or with yellow onions with a little bit of sugar substitute added for sweetness, if you like.

Prepare pie crust by putting the flour and flax meal in a small bowl and mix, then cut in the lard or shortening to make a crumbly mixture. Add the cold water and mix to pull the flour into a ball. Chill for about 30 minutes. Put a sheet of waxed paper on a board and sprinkle a little low carb flour over it. Pat the dough into a circle in the flour on the board, then flip it over. Put another sheet of wax paper over the top and roll out into a circle to make the pie crust. While you are rolling out the crust, preheat the oven to 375 degrees (F.)

Peel off the top paper carefully, then put the crust top down into a  deep -sided 7″ or 8″ pie tin or plate and peel off the bottom paper carefully. If it breaks or sticks to the paper, ease as much in as you can, then make repairs. Crimp the edges of the crust if they come to the top. Pierce with a fork and bake for about 10 to 15 minutes until lightly browned.

Slice onions thinly. Melt 1/4 cup butter in a large, deep skillet and sauté the onions over medium high heat until tender, about 15 minutes.

Break the eggs into large bowl and beat well. Add sour cream, seasonings, peppers and bacon bits and stir together. Add onions with butter sauce and mix together.

Pour the onion filling into the cooked pie crust and spread it around evenly. Sprinkle the shredded Parmesan cheese over the top. Bake for 20 minutes, then lower the oven temperature to 350 degrees (F.) and cook another 35 to 40 minutes until the top is golden brown. Remove from the oven and let cool at least 5 minutes before serving.

Resources for the information in this article include  Vidalia Onion,  Food Reference, Specialty Produce, New Georgia Encyclopedia  and Wikipedia

Link for “Meals for Two” on Smashwords