Continuing to move blog entries over, here is one from June 13, 2012, talking about one of my favorite vegetables — turnips. Two great recipes.

Ok, I admit that turnips are probably not on most people’s favorite vegetable list or even on the buy now and then list. And I will also admit that until a few years ago, I hadn’t even tried a turnip. I was beginning to ease into it a little though thanks to a Scottish Clans Burns Supper at Circus Circus Casino where the chef prepared traditional dishes for the catered affair that included haggis and “tatties and neeps” (potatoes and turnips). The flavor was intriguing and it was quite tasty.

When I went back into a low carbohydrate diet, I began looking at the turnip more closely since the carbs in a turnip are easily 1/4 of the amount in a potato (3” potato is about 65 carbs, 8 of which are fiber and a medium turnip is less than 8 carbs and a little over 2 are fiber). Would turnips be a good substitute for potatoes?

Before the arrival of the potato on the European continent, turnips were used in many of the ways that potatoes are used – roasted, boiled, stewed, cooked in hash and other ways. So, the use was very much the same. The flavor is not the same as a potato, but similar. The turnip needs to be peeled as the skin is bitter, so that might explain why one Irish lad I met was shocked to learn we eat the “jackets”. So with this in mind, I began auditioning the turnip in many roles that the potato had played in my cooking. I started with turnip fries and have to say, they are really good. This was followed by roasted turnips and those have become a favorite. But could the turnip replace the potato in potato salad?

I have made it several times now and even though the turnip alone is a very good replacement, the other vegetable that often steps in for potato, cauliflower, enhances the salad even more. Together the combination is a winner. Best of all, whatever potato salad recipe you use, the turnip and cauliflower combo is the low carb base for it. My recipe is my grandmother’s Texas-style potato salad that I loved while growing up, although I’ve made a couple of modifications omitting the celery in it that doesn’t agree with me and adding bacon bits for a little extra punch. So try my recipe or use your own to do your own evaluation of turnip and cauliflower salad. 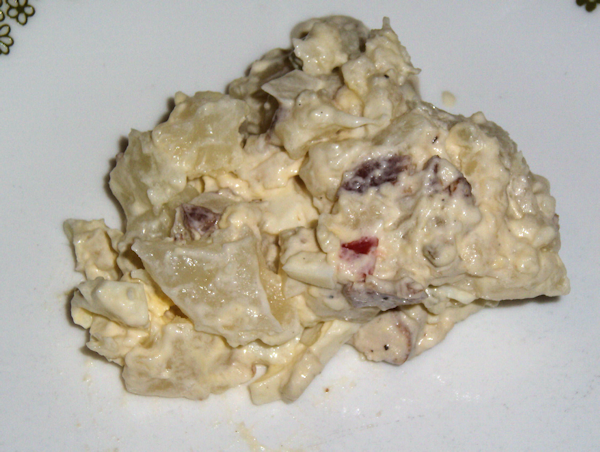 Replace potatoes in the salad with healthy turnips and cauliflower while still keeping the taste of  potato salad.

Peel turnips, making sure to remove any of the stringy fibrous outer layer where the plant has been cut off. This will not get tender when cooked. Cut the turnips into ½ inch or bite-sized cubes. Trim the cauliflower and cut into approximately the same sized pieces as the turnips.

Add to a pot of boiling water and cook until the turnips are tender (about 25 to 35 minutes, depending on the size of your cubes). Drain in a colander.

Transfer turnips and cauliflower to a mixing bowl that gives you enough room to mix the entire salad and add onions, eggs, bacon and celery. Mix.

In a small bowl, add mayonnaise, pickle relish, mustard, honey mustard dressing and seasonings. You can use seasoning salt or other flavored salts instead of regular sea salt. Mix dressing with a spoon until all ingredients are blended.

Pour dressing over the vegetables and stir until well mixed. Cover with plastic wrap or a bowl lid and put in the refrigerator for a couple of hours to chill.

Another easy recipes combining turnips with green beans is delicious.

Bring a pot of water to a boil and drop the turnip planks into the water for about 10 minutes to pre-cook them.  They should be almost fork tender.  Drain and put the planks on paper towels to dry.

Tip:  You can prepare these in advance, partially cook the planks in oil to just a slight brown, then drain and refrigerate or freeze them until you are ready to use.  If frozen, thaw the planks before the final drying.  Then heat the oil and finish frying them for a crisp french fry.