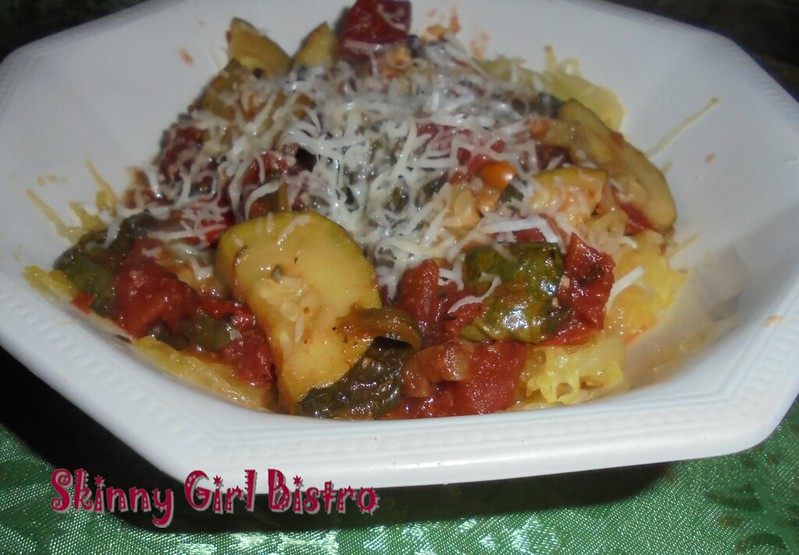 Looking for a little comfort food on these cold winter nights? Want to keep on your Meatless Monday plan? Look no further!

This yummy meatless sauce with Italian seasonings and zucchini pairs well with spaghetti squash to give you a delicious and low carb alternative to pasta. While it comes in a little higher in carbs than I usually aim for with my recipes, it is still only 13.5 net carbs per serving.

If you’re just not into a meatless sauce, then feel free to add ground beef and/or Italian sausage to the dish. It works great either way.

Cut the spaghetti squash in half, remove the seeds, rub with a little olive oil, and place face down on a foil-covered baking pan. Bake for about 40 minutes until a fork inserted into the squash goes through easily. Remove and set aside to cool.

In a medium skillet, heat the olive oil, then add onions and garlic. Cook and stir for about 2 minutes until the onion sweats. Add tomatoes, seasonings, and wines. Stir and cook for a few minutes, then lower the heat to simmer and cook about 20 minutes, stirring occasionally. The sauce should be thickening. Add zucchini and cook about 10 minutes until it is almost tender. Add the sliced mushrooms and cook another few minutes.

Use a fork to separate the spaghetti strands of the squash and warm in the oven or a microwave for about three minutes.

Add the spinach to the sauce and stir it in until it is limp.

Put 3/4 cup of spaghetti squash on a plate, and top with 1/4 of the vegetable sauce. Grate Italian cheese over the top. Serve with a salad. 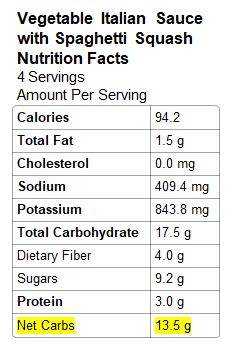 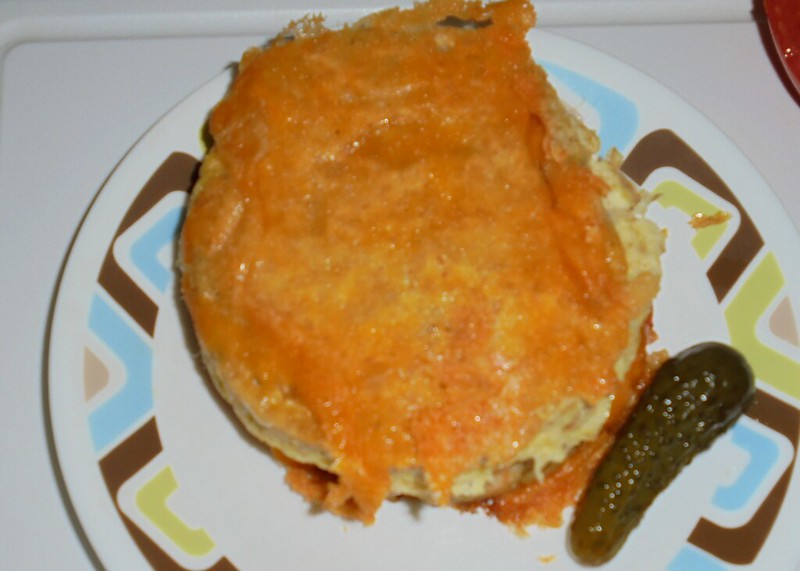 Still looking for a “meatless Monday” option for lunch or dinner? Here’s an easy but delicious suggestion. A grilled cheese sandwich! Not just any grilled cheese, but the deluxe version.

I’ve heard about using cheese on the outside of your sandwich for some time now and I decided to try it while elevating the basic grilled cheese sandwich a little. To do this, you need a non-stick skillet. I used my copper saute skillet to make it. It worked perfectly.

I used a low carb Muffin-in-a-Minute made in a bowl to make a tasty low-carb bread roll that I sliced in two horizontally. You can find the basic recipe link below. While I used flax meal and Bakesquick for my roll, this is easily adaptable to any low carb flour options you prefer.

To complete your meal, you can add a side salad or fried zucchini sticks, or turnip, kohlrabi, acorn squash, or celery root fries.

Low-Carb Muffin in a Minute recipe.

Prepare muffin bread in the microwave and slice across to form the top and bottom of each roll. 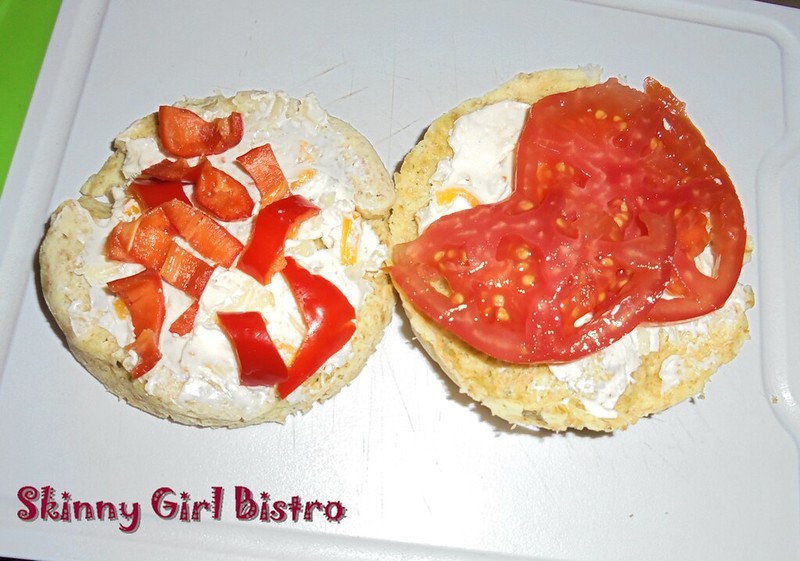 Preheat skillet on burner until hot, then turn to medium heat.

Place cheese slice on top of the pepper side. Put about 2 tablespoons of shredded cheese into the middle of the pan and spread it around to form the shape of the bread. Combine the two sides of the roll with filling in the middle. Place sandwich on top of the shredded cheese in the pan. Press down with the spatula to make sure the bottom of the sandwich is sticking to the cheese.
Grill for about 1 minute or until the middle cheese is beginning to melt. Put another couple of tablespoons of shredded cheese on the top of the sandwich. Place a lid over the top to keep the heat in and melt the center piece of cheese.

Carefully, using the spatula and pressing down on the top, turn the sandwich so the grilled cheese is on top. Cook for another minute until the cheese on the bottom is grilled and toasty. Remove the pan and serve. 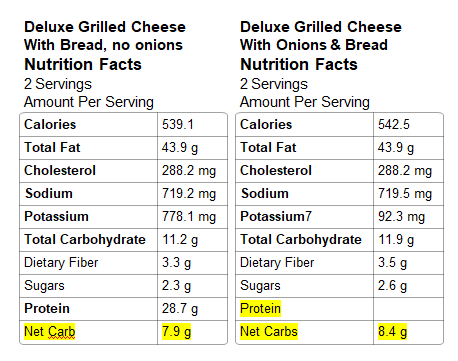 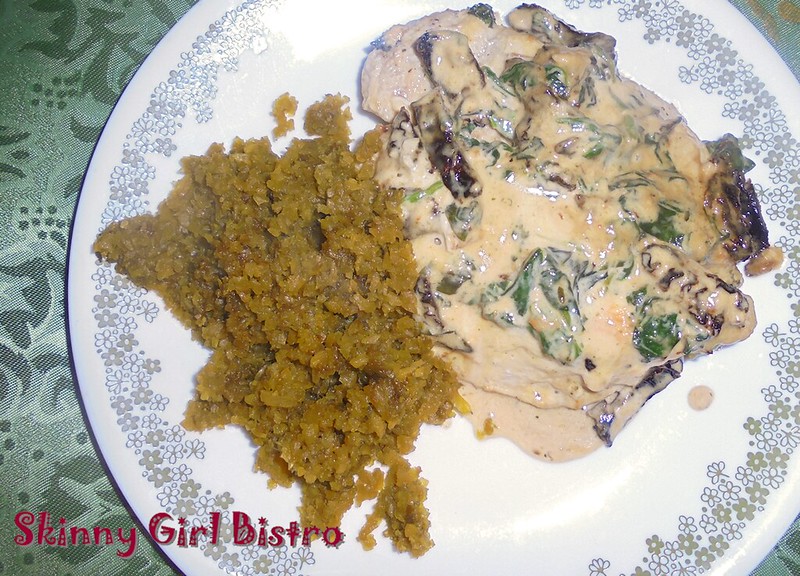 I make most of the meals at my house into small portions for two people. This is the case with this recipe for delicious creamy Tuscan-style chicken. If you want to make it for more people, it’s easy to double the amounts. If you have one very plump chicken breast, you can probably cut it across the middle as if you were butterflying it to make two chicken pieces. If the chicken is too thick, over 1/2″, then you should cut it to thinner slices, so it cooks thoroughly.

This recipe uses sun-dried tomatoes, but you can also use about six to eight cherry tomatoes cut in half.

Add olive oil to a medium-sized skillet over medium heat and cook the chicken pieces for 3 to 5 minutes on each side or until they are browned. Remove to a plate and set aside.

To the skillet, add heavy cream, chicken broth, Italian seasoning, and Parmesan cheese. If you are using cherry tomatoes, add them in now also. Cook over medium-high heat, stirring briskly with a wooden spoon until the sauce begins to thicken. Add spinach and the sun-dried tomatoes and stir them in. Turn to a simmer and cook until spinach begins to wilt. Add the chicken and any juices on the plate back to the pan and cook another three or so minutes until the chicken is heated.

Makes two servings. Serve with riced cauliflower or zucchini noodles. I served mine with a delicious riced golden beets side dish. Recipe follows. 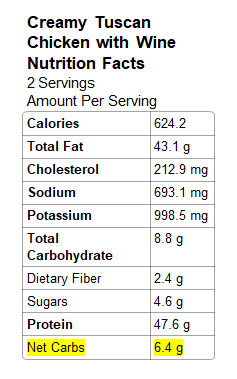 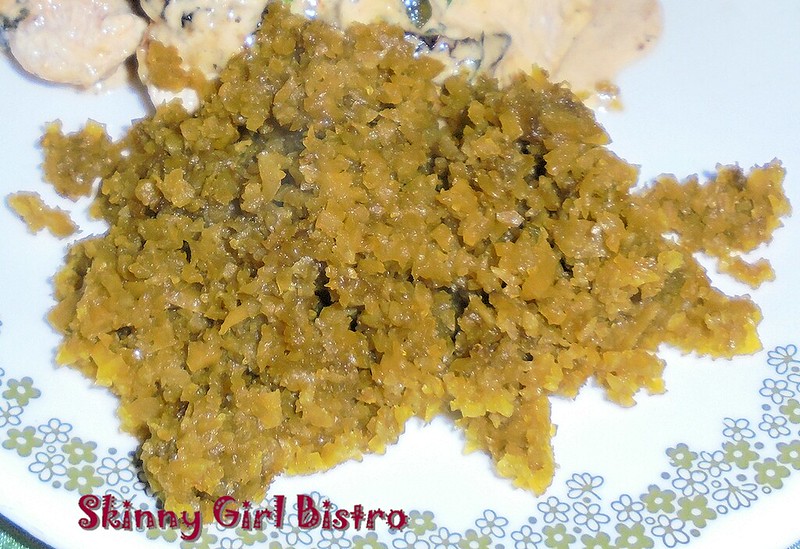 I’ve tried the frozen riced purple beets, and they are yummy with the earthy taste that the dark beets have and make a great side dish. However, I prefer golden beets with their lighter flavor. So, I riced up a beet and added a little chicken broth and seasoning. Voila! Delicious couscous-like pearls of delight. Along with the chicken, they really provided that extra touch of the Mediterranean flavor.

Rice golden beet in a food processor, using the pulse until it is the size of rice kernels. You can also use a grater to grate the beet, but the food processor is much easier.

In a small skillet, melt butter then add riced beets. Add about 1/4 cup of water and cook over low heat until the water almost evaporates. Add the chicken broth, seasoning, and salt, reduce heat to simmer and continue to cook until the beets are done about 15 to 20 minutes. Stir often and add additional water if they get too dry. 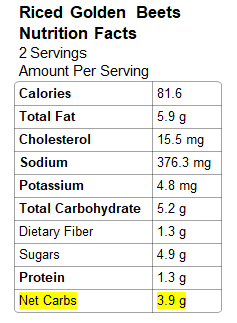 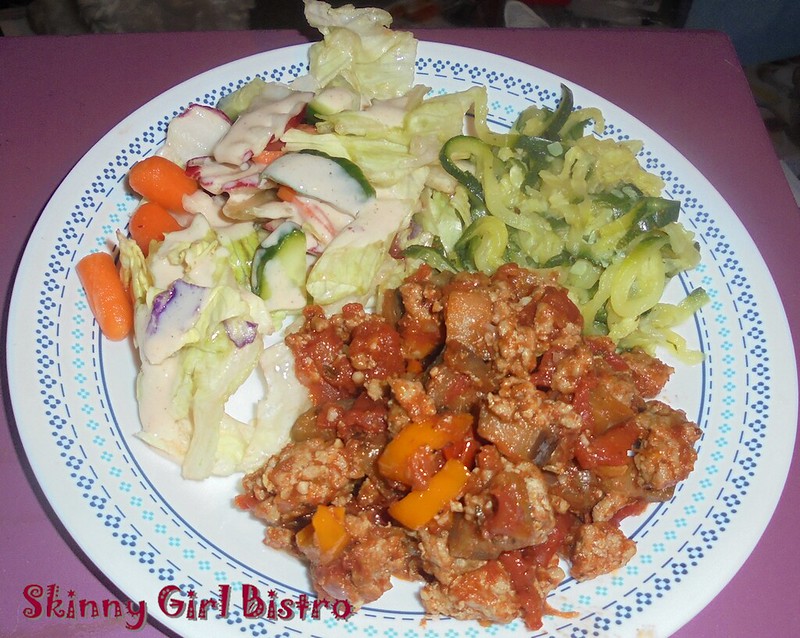 A rainy night or two ago, I pulled a package of frozen turkey from the freezer and pondered what I could throw together with it that suited this chilly night. I had canned tomatoes, an eggplant that needed to be used, and some of the mini-peppers in my fridge. So I threw this saucy dish together. It’s not quite a ragu nor is it a ragout exactly, but it’s closer to the latter, so that’s what I decided to call it. It’s a lovely combination of meat, vegetables, and sauce with Italian seasonings.

For my seasoning salt, I used Emeril’s Essence, but any seasoning salt will work. I also used red onion, which brings a bit more sweetness than a white or yellow onion, but any of them will work. In fact, this is a versatile recipe, so if you don’t care for eggplant, substitute in another vegetable, such as summer squash or mushrooms. Of course, you can also use ground beef in place of the turkey. For a vegetarian option, omit the meat and add in more vegetables, like the aforementioned mushrooms or chopped kohlrabi. Be aware that replacing the turkey with additional vegetables will increase the carb count a little.

In a large saucepan, brown the ground turkey, chopping into small pieces as it cooks. Add the onions and garlic and sauté until the onions are translucent.

Add the eggplant and peppers and continue to cook another few minutes, stirring a few times, then add the canned tomatoes and 1/4 cup of water (or white wine). Add all the seasonings and stir the whole pan together.

Bring to a boil, then reduce heat to a simmer and let cook for about 20 to 30 minutes until the liquid is reduced to a delicious sauce and the vegetables are tender. Taste the sauce and adjust any seasonings.

Serve with cooked zucchini noodles. You can either buy these in the frozen food section or make your own with a spiralizer or a vegetable peeler. Or you can do a wide shred with a food grater. 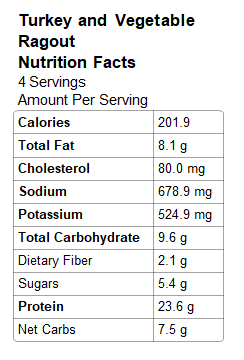 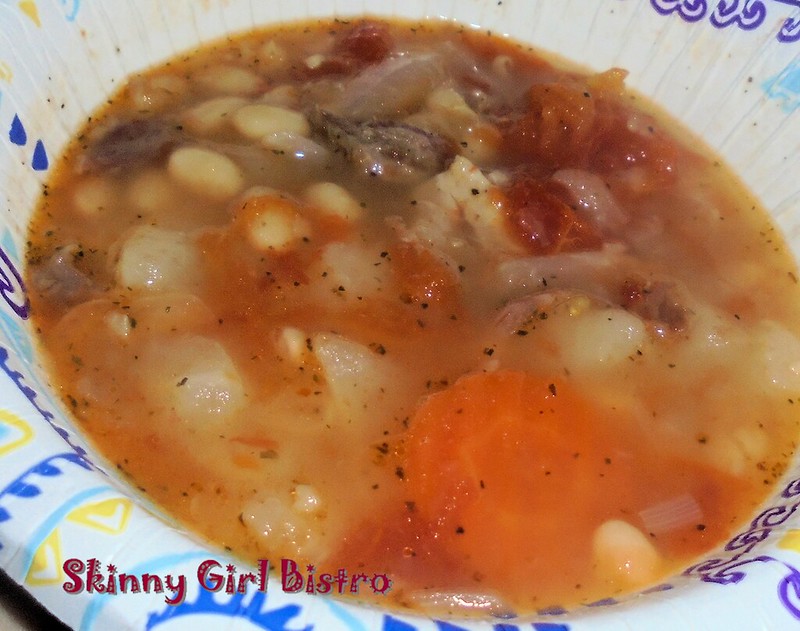 As a child, I grew up eating beans a lot. My grandmother would make a huge pot of pinto beans. We’d get bolillo (oval long bread rolls) from Mexico, and I loved to hollow the bread out and fill it with beans cooked with hamburger. But since I am trying to stay low carb these days, beans aren’t something I eat very often. Nonetheless, I’ll share this recipe for white beans with ham soup. This isn’t as low as I like most of my recipes to be, but it is still within reason for most people to enjoy on a low carb plan. The real trick is to add more ingredients to the pot to spread out the beans, so you don’t eat as many in one sitting. With that in mind, I added onions, carrots, and turnips to the pot with the ham and bean.

Generally, I use a ham hock to flavor the pot and add seasonings to round out the flavor. I also use a little of Better Than Bullion Chicken in it to add more flavor. If you want a heartier dinner, then cook up a sausage or a chicken breast to eat alongside the soup. These won’t add extra carbs and will help to fill you up with the smaller serving of soup.

In a large pot, pre-cook beans as directed on the package. Rinse, then add fresh water, salt, and pepper. Cook the beans from 2-3 hours until they are done. I usually put a ham hock or bacon in them to add flavor as they cook. Once they are done, add about 2 cups of water to the pot, then add the rest of the ingredients and cook until the carrots and turnips are tender. Add water as needed to keep the soup consistency. When done, you should have about 3 to 4 cups of delicious soup. 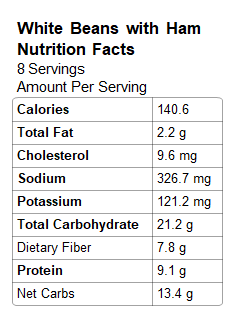