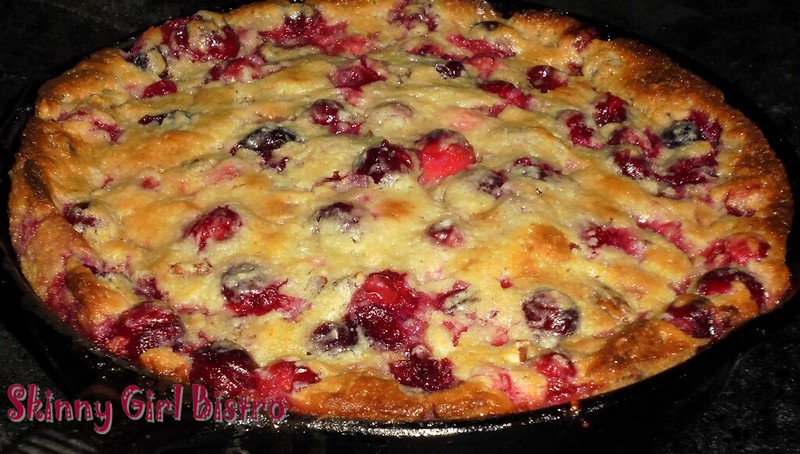 I found this recipe on Allrecipes.com and adapted it to both low carb and low sodium. The original recipe is called a Cranberry Pie, but it’s really a very moist cake. I’ve made it three times now, varying the third version to use 1 cup of apples in place of 1 of the cups of cranberries. I believe it will also make a great blueberry, raspberry, peach, or pear cake. The carbs will vary depending on the fruit you use. I also used pecans instead of walnuts, but either will work well with it, and I suspect almonds or macadamia nuts would be good also.

As a cranberry cake, it’s festive and delicious for an easy holiday meal dessert. Warm it up a little, then top it with a little whipped cream or ice cream. 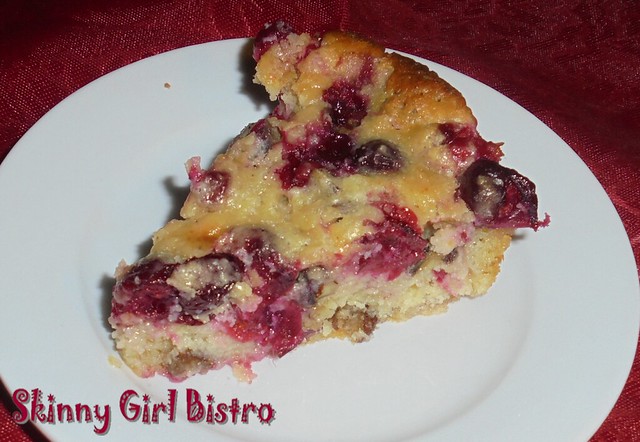 Preheat the oven to 350 degrees (F.). Prepare a 8″ pie pan or a cast iron skillet or other oven-proof pan by lining the bottom with parchment paper, then spraying the bottom and sides with cooking spray.

In a medium-sized bowl, add the flour, sugar and salt and whisk together. Add the cranberries and nut, then stir to coat them with the flour.

In a small bowl, beat the eggs, then add to the flour mixture along with the melted butter and almond extract. Stir to mix the liquid into the flour, making sure to get all the flour mixed in. The batter may be thick, but if it is too thick to spread, add a little water.

Spoon the batter into the prepared pan and smooth to even it. Bake for 40 minutes or until a toothpick comes out clean when inserted in the middle. 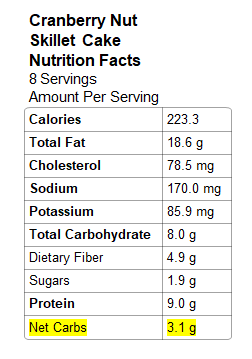 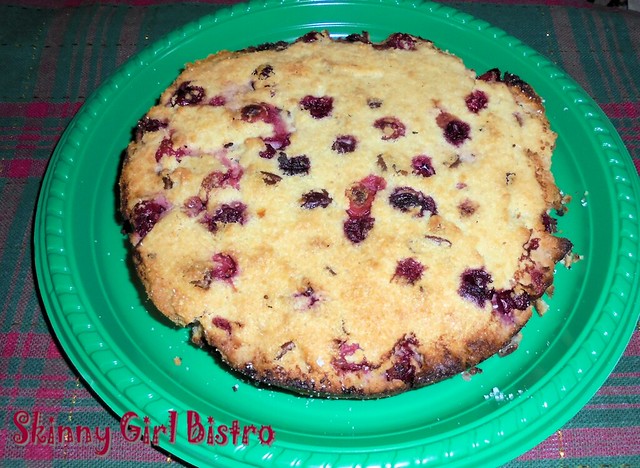 Preheat the oven to 350 degrees (F.). Prepare a 8″ pie pan or a cast iron skillet or other oven-proof pan by lining the bottom with parchment paper, then spraying the bottom and sides with cooking spray.

In a medium-sized bowl, add the almond and coconut flour, and sugar then whisk together. Add the cranberries and nuts, then stir to coat them with the flour.

In a small bowl, beat the eggs and egg white, then add to the flour mixture along with the oil and almond extract. Stir to mix the liquid into the flour, making sure to get all the flour mixed in. The batter may be thick, but if it is too thick to spread, add a little water. a tablespoon at a time to get the mixture to a spreadable consistency. When using coconut flour, it will absorb a lot of liquid, so add liquid, mix it in, then let it sit and add more if necessary.

Spoon the batter into the prepared pan and smooth to even it. Bake for 40 minutes or until a toothpick comes out clean when inserted in the middle. Let cool at least 10 minutes before removing. Nut flours are delicate and might break when you lift them out of the pan.

To flip to a plate, let the cake cool completely, then put the plate on top of the pan and turn it over. The parchment will allow it to release easily. Remove the parchment, then put another plate over the cake and flip it to get the top up. Serve with a low sodium whipped topping. 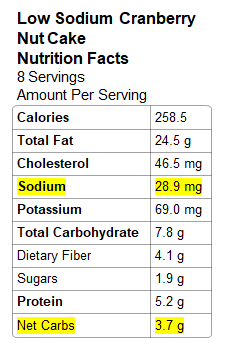 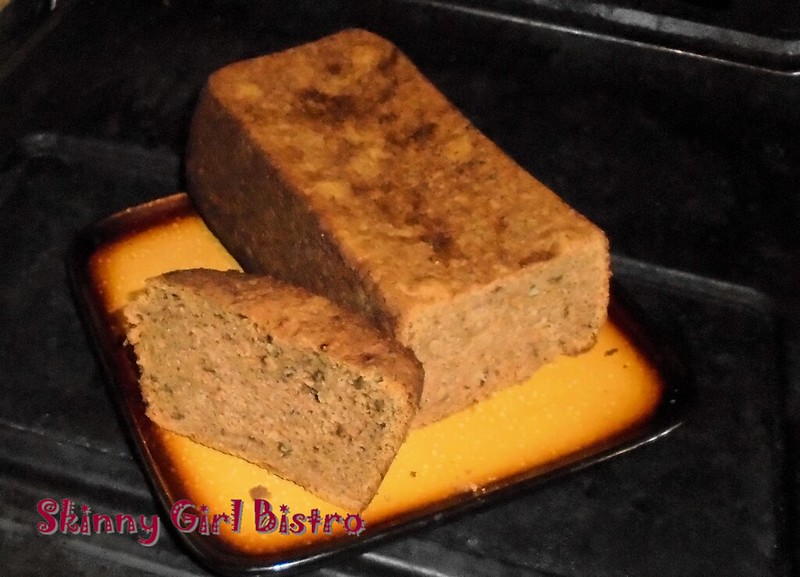 I can’t believe I haven’t published a pumpkin bread recipe since pumpkin is one of my all-time-favorite flavors. This recipe is so delicious and really easy. The cream cheese adds flavor and texture to the loaf. I seldom specify a low carb flour, but in this case, I do recommend using Dixie Carb Counters All Purpose Flour to make a wonderful bread loaf. It will still turn out well using other flour replacements, such as almond flour, soy flour, or coconut flour, but not textured as beautifully.

Note if you use coconut flour, halve the amount it is replacing (1 cup of flour = 1/2 cup of coconut flour) and add two eggs or two egg whites since the rise will come from the eggs. Of course, other flour choices might change the net carb count.

Preheat oven to 350 degrees (F). Prepare a 9x5x3-inch loaf pan. I prefer using a layer of parchment paper on the bottom to prevent sticking, then spray with cooking spray over the bottom and up the sides.

In a large bowl, add the cream cheese, butter, sugar, brown sugar, and Sweet Brown (if you are using) in mixing bowl. Beat until creamed together. Beat in eggs, adding one at a time, then add the pumpkin.

In another bowl, mix the flour, soda, baking powder, salt, and spices. Whisk until mixed. Pour the dry ingredients into the egg and cream cheese mixture and stir together until the flour is mixed in and evenly moistened, but don’t over mix. Stir in the nuts. Spoon into the loaf pan and spread it evenly.

Bake for 60 to 70 minutes until a toothpick inserted in the middle comes out clean. Remove and cool for 10 minutes, then remove from the pan. If the sides are stuck, use a plastic knife or thin blade to go around the edges of the pan, then invert over a plate. Let cool on a rack. 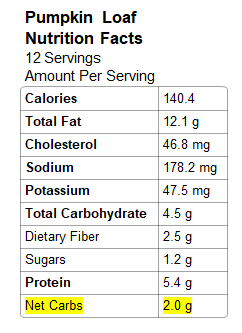 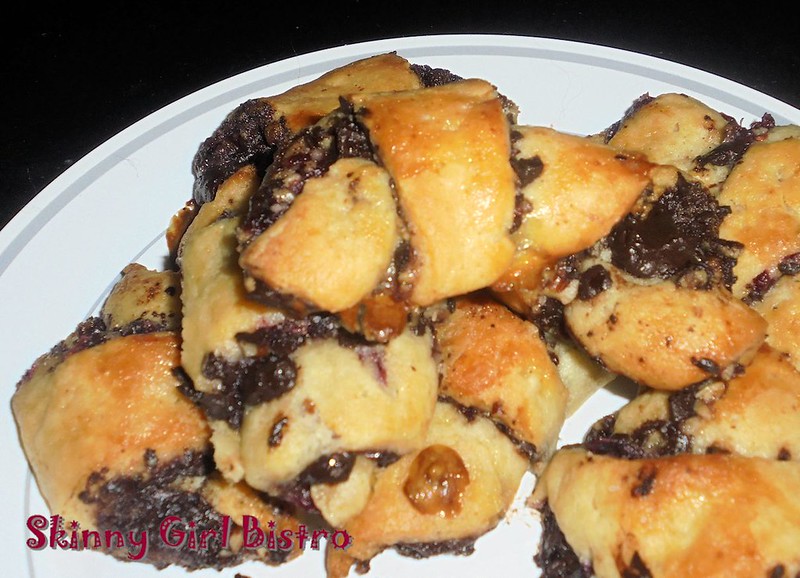 Just a little late for the Jewish holiday, I made a batch of low carb Rugalach cookies. These are simple to make, although a little time-consuming, and make a delightful cookie for the holidays. After my first batch, I plan to make a few minor changes to the next batch I make, but I wanted to get this recipe up before I do that. I cut down a little on the chocolate used, and this recipe reflects that.

Make the dough first. In a food processor, place the softened cream cheese pieces and the softened butter pieces. If you use unsalted butter, add 1/4 teaspoon salt. Pulse until the cream cheese and butter are blended together. Add the flour and pulse several times to mix it in. Scrape down the sides with a rubber spatula as needed to get all the flour mixed in. Pulse until the dough forms large curds.

You can mix it with a hand mixer also, but don’t let the dough form into a ball on the blades.

Turn the dough out into a bowl and gather it into a large ball. Divide it in half, shape each into a disk, wrap in plastic, then put into the refrigerator to chill for at least two hours.

Pull one disc of dough from the refrigerator, place a sheet of parchment over the breadboard, and sprinkle low carb flour on it. Roll out the dough into a circle about eight or nine inches in diameter. If it is too firm to roll easily, let it sit for about 10 minutes. Spoon or brush about 1/2 of the melted jam in a thin layer over the dough and sprinkle 1/2 of the cinnamon sugar over the top. Scatter 1/2 of the nuts, 1/2 of the cranberries, and 1/2 of the chopped chocolate over the jam. Cover the filling with a piece of waxed paper and gently press on it to push the filling into the dough. Remove the waxed paper, Slide the disk onto a baking pan and put the pan in the refrigerator to chill while you roll the second disc and repeat the steps.

Pull out the first pan when you put the second pan in, then cut the original dough into quarters, like you would a pizza. Use a sharp knife or pizza cutter for this. Try to get it separated evenly. Now, cut each wedge into three triangular slices. Starting at the outside edge, roll the dough toward the middle to form a crescent cookie and tuck the end tip under the dough on the baking sheet, curving the cookie a little. Repeat with each triangular shape, cutting each of the quarter wedges into three triangles.

Repeat with the second round of cookies. Put the shaped cookies in the refrigerator or other cold place on their baking sheets  to firm up for at least 30 minutes before baking.

Preheat the oven to 350 degrees (F.) Position the racks in the oven to divide it into thirds.

Before baking the cookies, mix the egg white and water together and brush over the tops of the cookies and sprinkle the granulated sugar substitute over each. 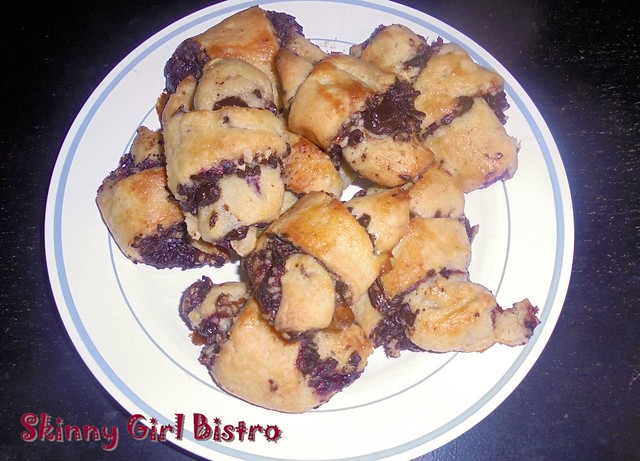 Bake for 20 to 25 minutes, rotating the sheets from top to bottom racks and turning them from the front to the back of the oven about mid-way through the baking. Remove when they are golden brown. Transfer to a cooling rack until they are just warm or at room temperature.