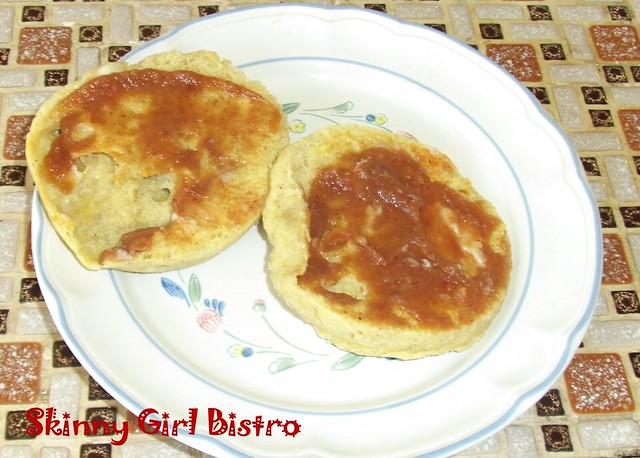 One of the hardest things for a bread lover on a low carb lifestyle is to pass up the delicious artisan breads, the yummy muffins, and San Francisco sour dough.  All right, I make an exception for sour dough… and a few other too tempting breads, but you can’t do it often and it’s hard to limit your indulgence.

But you can whip up some delicious breads that are made with low carb flours and nut flours.  It just means stocking some of these flours in the house.  I especially like to make what I call “Magic Muffins” for breakfast.  They are a variation on the Atkins Muffin in a Minute in that I use low carb flours in them.  I also frequently use Vanilla Whey Protein Powder.  I use a brand that has less than one net carb in a tablespoon, so it’s easy to add without adding much to the carb count.

This recipe for a muffin made with almond flour and coconut flour is delicious and kind of resembles an English muffin.  The ingredients are mixed in a small bowl and cooked for one minute in the microwave, then I loosen it from the bowl, let it cool about 5 minutes and cut it across the middle to put in the toaster.  It’s sturdy enough to stand up to toasting and the flavor is really good.  Add some butter and jam or apple butter on top and it’s a real treat.  It’s also gluten-free.

In a straight-sided microwavable bowl, stir the egg, oil, cinnamon and sugar substitute together until they are completely blended and no white strings of egg are visible. I use a rubber spatula with a small head for this. Stir in the almond and coconut flours and protein powder (if using) until they are thoroughly mixed in. Be sure to scrape the sides down.

Cook in the microwave for 1 minute. Take out, loosen the edges, and let cool for about 5 minutes to set up. Use a knife with a serrated edge to cut the muffin in half. Toast in a toaster or in the oven until browned to your liking. The longer you cook it, the crisper it gets.

Spread with butter and apple butter for a delicious breakfast or anytime treat.  Makes 1 muffin.

This is a recipe I found on at detoxinista’s web site for making no sugar added apple butter in a slow cooker. I followed her recipe almost exactly except I substituted in 1/4 cup diet cranberry juice for the water and I used Gala apples instead of Fuji, but the recipe works with almost any apple. It doesn’t use any additional sugar and the scent in the house is absolutely tantalizing while it cooks.

After you’ve cored and chopped the apples, put the in the slow cooker and add the seasonings and cranberry juice. You don’t need to peel the apples. The peels will cook down and blend in once they are pureed. Stir all the ingredients together, then turn the cooker on to low, cover and cook for five to six hours until the apples are falling apart soft. Use an immersion blender to puree the apples or put them into a food processor or blender to puree. I used a hand held drink blender and it worked beautifully.

Cover the pot loosely and cook another two to three hours until the mixture becomes a thick, spreadable butter. Turn off and let cool, then spoon into jars. I got 4 eight oz. jars from the 3 pounds, but you may get more or less, depending on how thick you want your butter.

Makes 3 to 4 cups of apple butter. A serving is 1 tablespoon