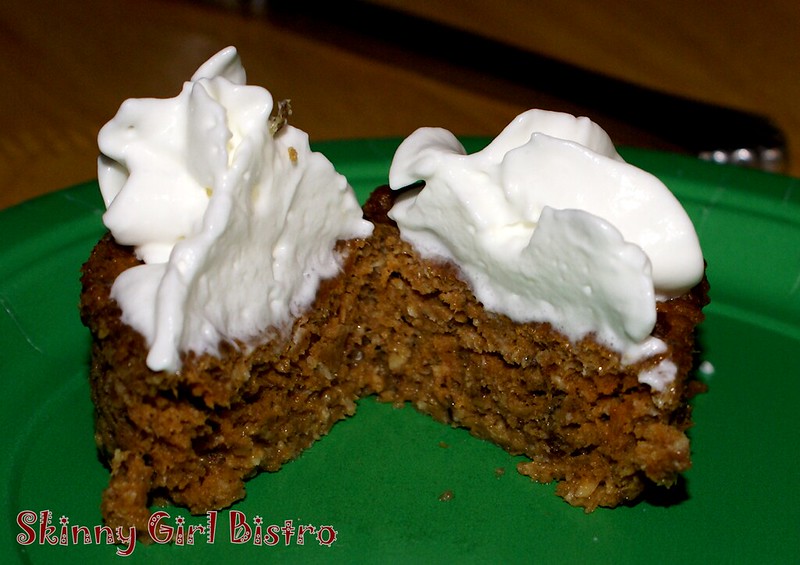 A couple of weeks ago a recipe popped up on Facebook for Pumpkin Pie Cupcakes and I love almost anything made with pumpkin.  So I decided to make them low carb.  No, not just low carb, but also gluten free for those  of you who have issues with wheat flour.  The recipe has a few incarnations on the web, so I am not sure who actually came up with it, but it may be from here.  This version evolves from the original and it is pretty darn good.

A couple of things, though.  Definitely use paper baking cups so you don’t have a mess trying to get these out of a cupcake mold.  I used silicon molds that you can flex to remove the baked goods and they didn’t come out cleanly.  Which brings up the other thing, which is to cook them until a toothpick inserted in the middle comes out dry.  Mine was a little moist and I thought it would set up once it cooled, but it didn’t set up well enough to come out without leaving bits behind in the mold.  It also didn’t separate into a pie center with the surrounding crust, but the taste is definitely a pumpkin pie.

Preheat oven to 350 degrees (F.)  Line a 6 cup muffin tin with silicon liners, foil liners or paper lines sprayed with cooking spray.  If you use paper liners, just serve them in the paper.

Fill each muffin cup with 1/3 cup of the mixture. Bake for 25 to 30 minutes, use the toothpick method to check that it is done, then remove and let cool completely.

Remove cupcakes from pan and chill in the fridge for 3 until ready to serve.  Top with whipped cream or frozen topping.   Makes 6 to 7 cupcakes.