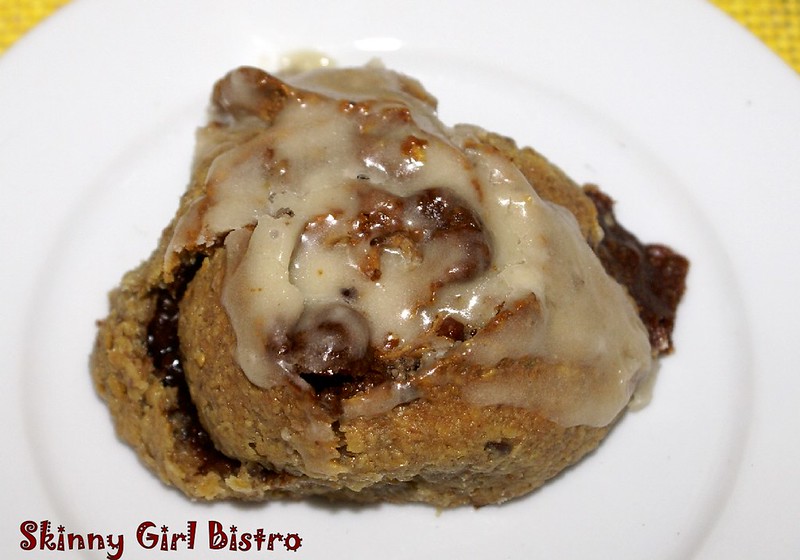 Package contains about 1 1/2 cups of mix to make the cinnamon buns plus a packet of cinnamon filling mix. You need to add heavy cream, butter, seltzer water, and yeast.  You also need butter and walnuts (or pecans) for the filling. 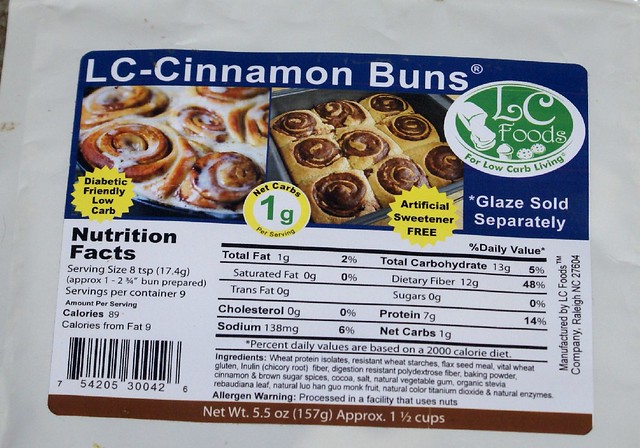 I mixed according to the directions and used 2 tablespoons of Diet 7-Up for the carbonated water.  The dough was extremely sticky.  The directions say the dough needs to be stiff to roll and to add extra carbonated water if it isn’t.  It didn’t say what to do if the dough was too soft.  I add 2 tablespoons of protein powder and mixed it in and it was still too soft and sticky.  I added 1 tablespoon of carbolose low carb flour and it was finally not too sticky to handle although still too sticky to roll out.  Next, I separated the dough into three equal-sized balls.

I made the cinnamon filling according to directions using 2 tablespoons of water and 1 tablespoon melted butter.  Very thick filling.  I put 1 tablespoon of carbolose on the bread  board, took the first ball and shaped it into a cylinder about 5 to 6 inches long, then put it on the board and pressed it into a 3 inch wide by about 9 inch long strip.  It was too thin to press to 12” long without it tearing.  I turned it a couple of times during the shaping to keep it from sticking to the board and shifted the flour under it.

Then I spread the cinnamon mix onto the strip, which was not too easy as the cinnamon mix wanted to stick to the fork I was using and pulled the dough a couple of times.  I spread chopped pecans on top since we don’t use walnuts at our house.  Then I cut the strip into three one inch wide strips and rolled them from one end to the other to make the roll.

Once they were all done and in the baking pan, the instructions say to put in a warm 70-85 degree oven to rise.  I don’t know about you, but my oven, which I bought about 5 years ago, doesn’t go down below 250 degrees.  It’s electronic ignition, so it doesn’t even have a pilot light to give off heat.  I used my toaster oven, set to the unmarked area below 150 degrees and hoped it wouldn’t destroy the yeast before its time.

It took about twice as long as recommended for the rolls to almost double in size, so that was about 1 hour 15 minutes to rise.  This might be because I live in a high altitude location and that does affect the rise.  Then I brought the oven up to 400 degrees and allowed it to heat for about 5 minutes, then put the rolls in for 15 minutes to bake.  At this point, they look like they will be very tasty although the dough itself is brown rather than white bread type dough.  The mix contains flax meal, wheat isolate, wheat starches, wheat gluten, inulin, and other products that substitute for wheat and sugar.

So, making the rolls didn’t go as smoothly as I’d hoped and if you’re trying it, I would suggest not adding the carbonated soda until you have all the other ingredients mixed to see how thick your dough is, then adding it a little at a time.  I still think you will need a low carb flour, possibly coconut flour or almond flour to roll or pat the dough out on in order to prevent it from sticking to the board. 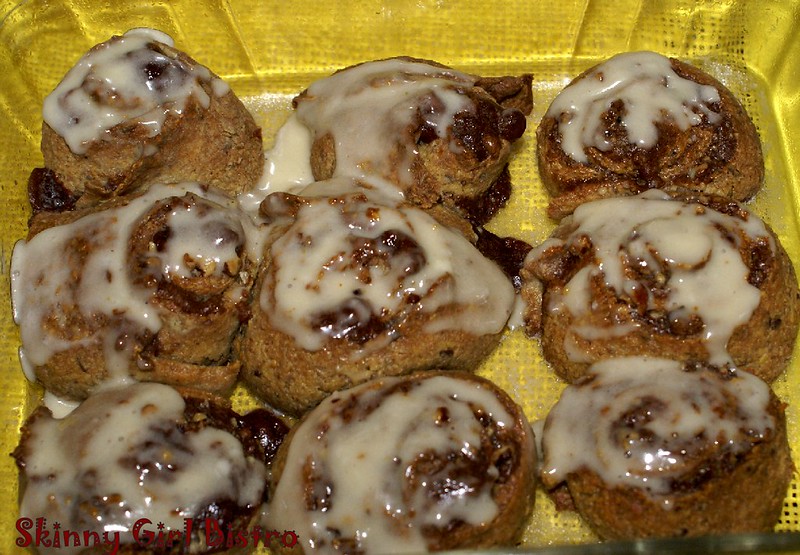 How about taste?  This is the bottom line.  Is the taste worth the expense and effort to make these?  My taste test panel was only two people and we thought that the rolls had a very good flavor, lots of cinnamon taste and were slightly crispy outside with a soft center.  I pour two tablespoons of melted butter over the rolls when they came out of the oven and that added a buttery taste to the rolls that is very nice.  I made a powdered sugar icing and spread it over the top, which added a sweeter taste to it.  We did notice a slight bitter aftertaste, which I think came from the stevia used in the mix or from the inulin.

Overall, I would say it is a very good cinnamon roll and not too difficult to make.  It is almost $1 per cinnamon roll and they aren’t very big ones, about 3 inches in diameter.  My rolls are uneven in size, but that is likely the baker’s fault and I didn’t cut them evenly.  I might buy these again and try them, but it wouldn’t be too often at the price for the mix.  I have a couple of other options to try, including cinnamon bread from Dixie Carb Counters.  I will do that over the next few weeks and post a review.

I give these cinnamon rolls  4 out of 5 tasty spoons.

Disclaimer:  I have not received any promotional items to review and no one from any of the companies whose products I review has asked me to do so. I have purchased the product and am giving my honest opinion about it. Should any company send me a product to try, I will state it up front and will still give my honest opinion.