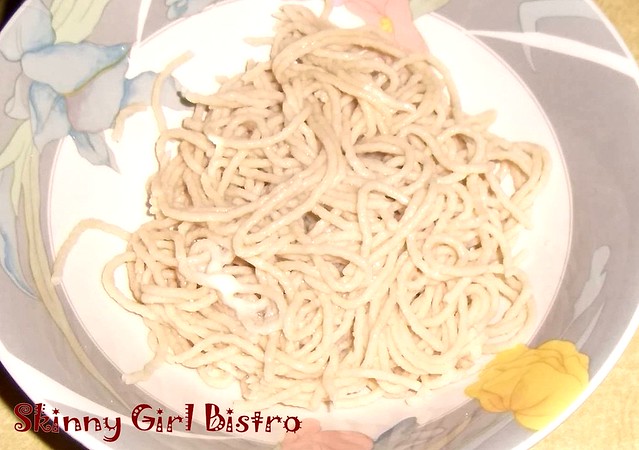 For all that pasta is supposed to be good for a diet and the number of calories diets that include it in some form, it’s practically impossible in a low carb diet. I made a stab at Dreamfields Pasta a few years ago and actually did okay using it, but it was proven that their claims about blocked carbs were incorrect and the pasta did affect the glycemic count for those who are diabetic. 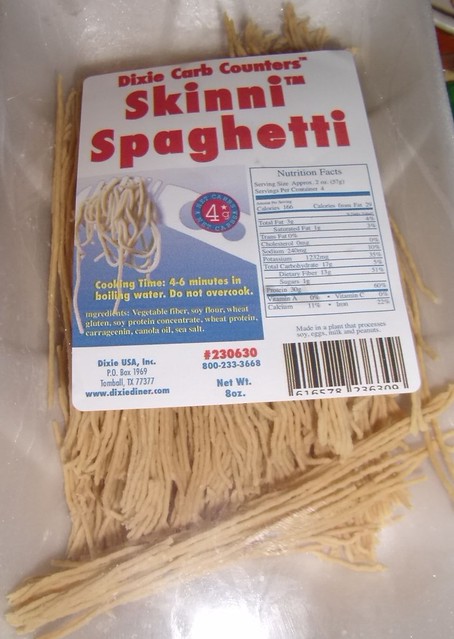 So when I saw that Dixie Carb Counters had a spaghetti out that actually looks like spaghetti, although a little curvy, I wanted to give it a try. I ordered an 8 ounce package, which is four servings, and decided to try it with my salmon with cream sauce recipe.

To begin with, it cooks in about six minutes and looks like regular spaghetti. It’s not slimy like the oriental noodles that I tried in the past. I drained it as normal, put some butter on top and then put my creamed salmon on top of that, added a little Parmesan Romano cheese and had a bite. It was delicious. While not exactly like the regular flour spaghetti, it was still very tasty and served its purpose well. I mean, really, pasta isn’t exactly loaded with flavor by itself, but serves as the medium to put those delicious sauces on. Overall, this was very satisfying and now I want to try more spaghetti with pasta sauce and meatballs.

One note, although the package will serve four normal servings, I actually used less so I think I will get six servings from one package. Unlike regular spaghetti, it isn’t in the lower price range. Like everything that is made for low carb dieters, it is in the $8 plus price range and not readily available at grocery stores.

But the good news is that it is low carb, it looks and tastes like spaghetti, and is great for those moments that you’re craving pasta.

This Skinni spaghetti is available by mail from Dixie Carb Counters website or from Netrition.com.

Disclaimer: I have not received any promotional items to review and no one from any of the companies whose products I review have asked me to do so. I have purchased the product and am giving my honest opinion about it. Should any company send me a product to try, I will state it up front and will still give my honest opinion.