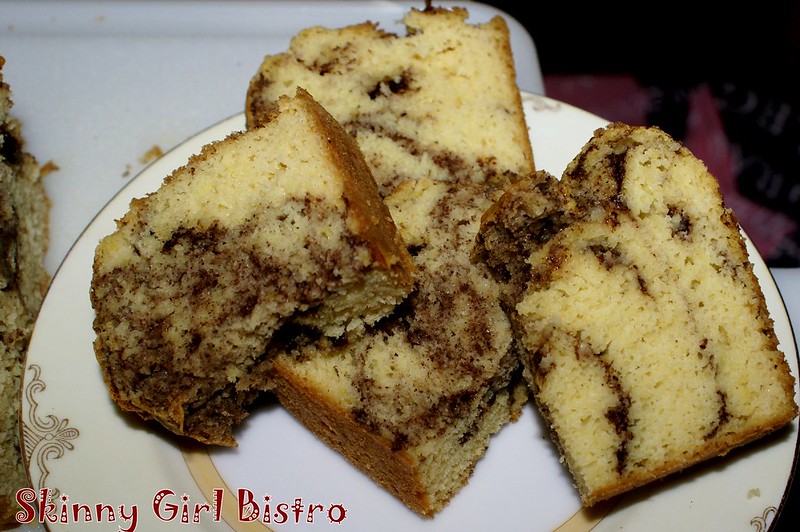 I tried the LC Cinnamon Rolls a couple of weeks ago and they were good, although small and somewhat troublesome to make.  Read my review  here.  So this week, I am trying the Cinnamon Swirl Bread Mix from DCC.  These are not really a cinnamon roll, but they have more cinnamon in them than many commercially made Cinnamon Breads from the market.  They are also not a yeast bread, but more of an egg bread. 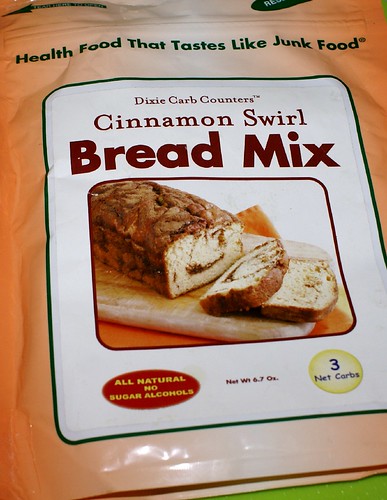 The mix goes together easily with the add-ins you need being 3 large eggs, 3 tablespoon soft butter, 1/4 cup sour cream, 1 teaspoon of oil and 2 tablespoons of water.  The package has two packets in it; one has the bread mix and the other has the sugar free cinnamon sugar.  You also need a 4”x 8” bread pan.  This is the smaller loaf pan you usually use for fruit bread rather than the standard-sized loaf pan.  To make it, you simply mix the first packet with the bread mix in with all the add-ins and stir, whisk or beat on a very low setting on the mixer to blend it together.  Put 1/2 of the batter into the pan and spread it smoothly, then cut open the second pack and sprinkle the cinnamon over the batter evenly.  Although it says to put all the cinnamon on this level, I saved some for the top because there is a lot of it.

Next you add the rest of the batter over the top of the cinnamon, smooth it out evenly.  Add the rest of the cinnamon if you save some like I did, then use a knife to pull through the batter to spread the cinnamon into swirls.  There’s really no right or wrong way to make this distribution.  Just try to spread it evenly through without actually mixing it into the batter.  Smooth the top out again and put it in a preheated 350-degree oven for 30 to 35 minutes.  I cooked mine 30 minutes and it was a lovely golden brown, but I let it go a few minutes longer and pressed against the top to get the spring back.  When it cooled, it did sink in the middle and was not completely cooked in the center.  So I would say, depending on your oven, this might take 35 to 40 minutes to cook completely.

The flavor is wonderful.  It has a very strong cinnamon flavor, as one would like a cinnamon bread to have, and it is more like bread than a coffee cake.  A slice of this with a cup of coffee or tea makes a wonderful snack or light breakfast. Additional butter on top is optional.  I don’t think it’s sturdy enough to pop in the toaster, but it would warm in a toaster oven or a microwave easily.

The mix costs $9.30 plus shipping from Dixie Diners  or you can buy it through Netrition.com for less (currently $7.29 plus shipping – hint, your whole order ships for $5.99 so order everything you want at one time).  One of my biggest complaints about low carb mixes is that they are pretty pricey.  In fact, almost any food mix that doesn’t use standard flours and sugar are usually more than double in price.  I appreciate that these companies have gone to a lot of work and expense to develop the mix formulas, but it seems they would sell more if they weren’t so high.

Nutrition info for 1/16 of the loaf – it makes 16 slices.  I usually cut it in eight slices, then cut each of those in half rather than trying to make 1/2-inch cuts.

You could easily make these in muffin cups, making individual cinnamon rolls.  Separate the batter into two sections, put about 1 tablespoon from the first section into each of 12 muffin cups, then sprinkle the cinnamon on top of each roll and add the rest of the batter from section 2 by tablespoons on top of that.  Swirl the cinnamon through to mix and level the tops.  Bake for about 25 to 30 minutes.

You could also add chopped nuts to the cinnamon layer if you’d like.   For a dozen rolls, you would increase the net carb count to 4 nc per muffin.

On a scale of 5 spoons being the top, I would give this cinnamon bread mix five spoons and I am definitely ordering it again.

Tip:  If you want to make this a great dessert bread, add a sugar-free Cream Cheese Glaze to it or a Warm Cinnamon Bourbon Syrup topping.

Mix the ingredients together by hand until completely mixed. If the icing isn’t thin enough to spread easily, add a little water until it is the desired consistency. Drizzle over the top of the bread.

In a small saucepan, add the ingredients and stir together well. Heat over medium heat until it thickens. Remove from the heat and spoon over the bread or cinnamon muffins.

Let me know if you try this bread (or the glazes)and how you like them.

Disclaimer:  I have not received any promotional items to review and no one from any of the companies whose products I review has asked me to do so. I have purchased the product and am giving my honest opinion about it. Should any company send me a product to try, I will state it up front and will still give my honest opinion.