Oddly, even though I grew up adjacent to Mexico and thrived on Mexican food, jicama was something I really didn’t encounter. Not even when I moved to Southern California.  I didn’t “discover” it until about ten years ago when I spotted the odd-looking root in the grocery and decided to try it. What I found was an unusual vegetable that has a crisp, clean flavor and a bit of sweetness. It reminded me of an apple in texture and in crunch.

Most frequently, jicama seems to be cut into small sticks or grated and put into salads and slaws, where it does an admirable job. It can also be cooked, baked, boiled or fried. One of the interesting characteristics is that it doesn’t get soft. It keeps the crispness, which makes it great for a dipping chip, even if you fry it. It adds a bit of crunch to a stew while substituting for a higher carb’d vegetable.

Cultivated South of the Border

Pronounced hee-ca-ma, it is also called yambean, although it is not a yam. Jicama is native to Mexico and South America. It is part of the legume family and grows a vine in tropical and semi-tropical climates. The edible jicama root is a globular shape and has been referred to as Mexican turnip, although the flavor is nothing like a turnip, or Mexican water chestnut, which it resembles in crunch. Other names for it are bengkoang, sengkwang and yacon. The flavor suggest that it would also be good in Asian food as a water chestnut substitute. It is grown in Asia and in other tropical and semi-tropical areas, including Florida, Hawaii and Puerto Rico.

Jicama, how do I love thee?

Let me count the ways:

There are more ways than I can count to use this versatile vegetable.   If you have other ways you’d like to share, let me know.

Here are two ways to use jicama from this site:

Root Vegetable Fries (on the Celeraic page, go to the bottom)
Sizzlin’ Hot Snacks (toward the bottom, snack options with  beets, daikon and jicama)

And here’s a new recipe for jicama for this entry: 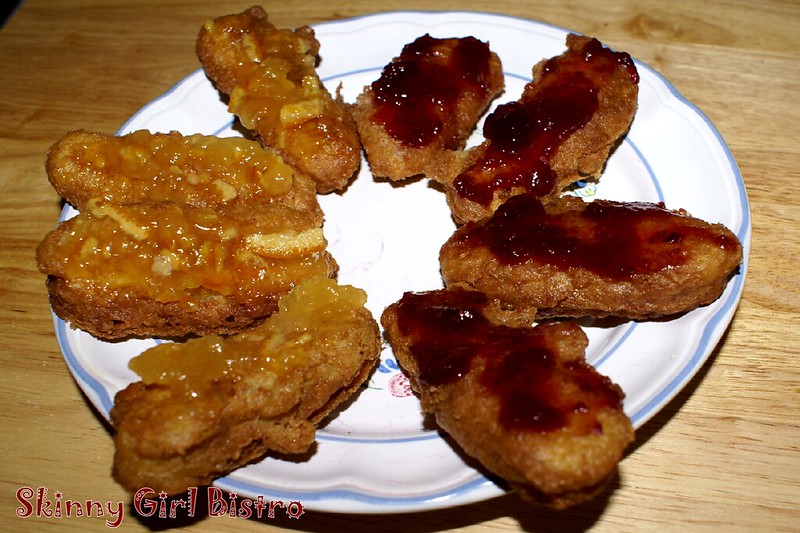 Mix the flour, egg, baking powder, sugar substitute and spices together to make a batter.

Heat enough coconut oil in a small pan to bring it to about 1/2 inch. Reduce to a medium heat.

Dip a jicama sticks into the batter, then carefully slide into the pan of oil. Cook about three at a time until golden brown, then turn over to cook the other side to golden brown or spoon the oil over the top while cooking to brown the top. This only takes a couple of minutes. Remove to paper towels to drain. Spread with sugar free raspberry or other jam of choice.

All comments relevant to my posts are welcome. SPAM is not.  If the post has nothing to do with my site content, it will not be posted.

This article used the following for reference: Specialty Produce, Nutrition and You,  Natural Society Newsletter

Top photo from WikiCommons, used with permission – By Wicki (Own work) [Public domain], via Wikimedia Commons

2 thoughts on “Join In on Jicama”