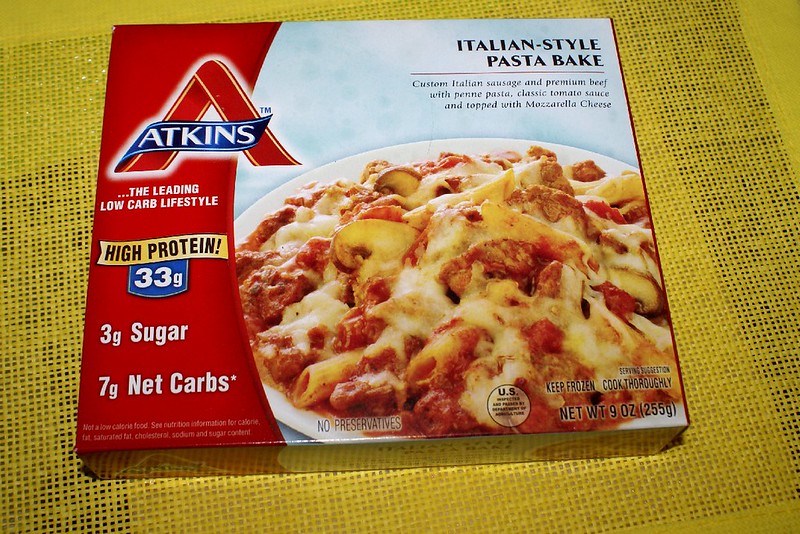 While I am usually a fan of most of Atkins’ Nutritionals Products, the Italian Style Pasta Bake is lacking in both pasta and flavor. When I saw this product in the freezer section, I was excited to try it. I mean, look at the photo! Doesn’t it look absolutely delicious with lots of pasta, cheese, and sauce?

I admit it. Pasta is a difficult food to have on a low carb lifestyle. When Dreamfields Pasta came out with their pastas that they alleged were the equivalent of 5 net carbs in a serving, I was thrilled. Unfortunately, that didn’t turn out to be the case and they had greatly misstated the actual carbs. Although I did try them in several dishes and had no ill effects or weight gain from one serving and I still use the product. Atkins had a pasta on the market also, which I think has since been discontinued, but I never tried the pasta because it was still too high in carbs to fit into my lifestyle.

So, I saw this one and thought it would be the answer to a dream. It only has 7 net carbs in the whole meal and generally, Atkins meals are pretty generous for the average eater. I popped it in my microwave to cook and pulled it out to stare at it in disappointment. If there is 1/4 cup of pasta in this dish, I would be surprised. The sausage is plentiful though and the flavor of the sausage is very good, but the sauce lacks spice and is just too bland to really make a hit with me. The actual cooked product bears little resemblance to the picture on the box. I wish I’d taken a photo of the actual dish, but I didn’t and I don’t plan to buy it again in order to get the photo. Take my word, this is not one of Atkins better products.

Now, Atkins has often improved on their products when the feedback and sales aren’t that high and it’s possible they will try to improve this one as well. So, if I see a “new and improved” label on it, I might try it again. For now, I’ll stick with my pasta sauce on spaghetti squash or zucchini noodles. I also have pasta flour from LC Foods that I just might try making one of these days soon. Stay tuned for that!

On a scale of 1 to 5, I give this 2 cooking spoons. It’s not terrible, but it’s not very good either.