Thanksgiving is upon us… the start of the winter holiday season where many challenges face those of us trying to maintain weight loss while still enjoying the season. I am thankful for many ways to do just that and I will be sharing a few of those over the next few weeks. For starters, I have up a few recipes on this site that will work well for Thanksgiving and Christmas.

Typically, you’ll want to stuff a turkey or even a pork roast over the holidays, but normal stuffing is loaded with carbs. Make your own stuffing bread with low carb flours. Find the recipe for the one I use here.

Those mashed potatoes are also loaded with carbs but you can make a combination mash with turnips and cauliflower that will be just as tasty and not nearly as high carb’d. Try this recipe for Smashed Turnips with Leeks. Or as another alternative, try the Irish Style Celery and Kohlrabi. Or maybe you’d like a nice alternative for the sweet potatoes?  Butternut Turnip Mash is excellent.

One of my favorite desserts is Pumpkin Cheesecake and it’s really easy to make as a low carb option. I am so thankful for 0 calorie 0 carb sugars that taste good! I remember making a cheesecake many years ago with a sugar substitute before aspartame came in and it had a not really great flavor, but also had that awful after taste. This version is almost identical to a fully sugared version.

Sometimes a big holiday like Thanksgiving or Christmas features a big meal that leaves you feeling as stuffed as the bird started the day. With several side dishes and stuffing, you may find yourself looking for a lighter dessert than pumpkin pie or cheesecake. That’s where this simple to make and very delicious Pumpkin Panna Cotta comes in. It’s low in calories and carbohydrates but still has the pumpkin pie taste without the heaviness. Serve it with a bit of whipped cream and a few nut sprinkles and you have a satisfying, delicious dessert that won’t overload your stomach.

While this on takes about 15 minutes to make, allow enough time for the panna cotta to set at least four hours. Or make it the night before the big meal. 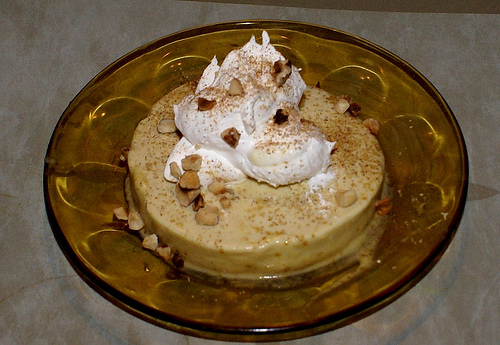 Sprinkle 1 envelope unflavored gelatin over 1 cup whipping cream in a medium bowl and let stand for 5 minutes to soften the gelatin. While it is softening, bring almond milk to a simmer just below boiling point. Slowly whisk the milk into the gelatin mixture with pumpkin puree and add sugars, vanilla whey powder (if you are adding), vanilla extract and Pumpkin Pie Spice. Pour into six dessert dishes, cover each with plastic film that is loose enough to touch the top of the mixture so that it doesn’t form a film. Refrigerate for at least four hours until firm.

To serve, lightly dust with pumpkin pie spice, then top with whipped cream and a few chopped nuts if you like.

You can also un-mold it by running a knife around the edge, then putting it in a shallow bowl of hot (not boiling) water for about 20 seconds to melt the gelatin a little, then flip it onto the dessert dish. Sprinkle with a little pumpkin pie spice and sugar free (or reduced sugar) brown sugar.