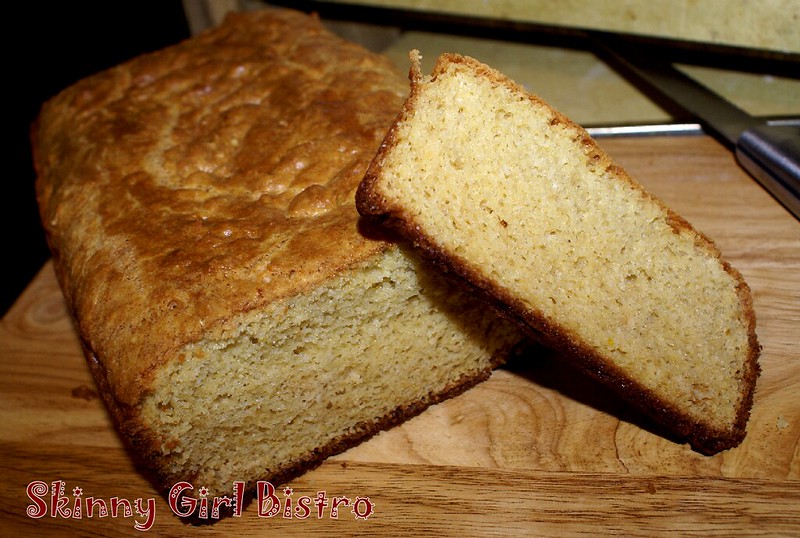 I admit that I have a fondness for Dixie Carb Counters products and that’s because they taste good.  This is the first time I’ve tried their white bread mix as I usually prefer the wheat bread, but now and then it’s nice to have white bread in the house.  Besides, PK prefers it when making peanut butter toast.

This bread mix is billed as “One Step Homemade All Natural White Bread” and it is that.  It couldn’t be simpler.  Put the mix in a bowl, add egg and/or egg whites and butter. Then mix it together for about a minute.  The instructions say to use a whisk, which I tried, but find unsatisfactory as too much of the dough accumulates in the inner wires of the whisk and it’s just thick enough that it doesn’t want to release easily.  So I just used a big spoon and stirred really well, getting to the mix on the bottom of the bowl.

Put the mix in a greased (or cooking sprayed) bread pan and cook in a 325 degree oven for 50 minutes.  What could be easier?  And the result is a beautifully browned load of white bread that makes 24 thin slices at 2 net carbs each.

The flavor is great!  The ¾ cup of melted butter added to the mix insures that it will have a buttery delicious taste.  It holds up well when cut and stands up to the additional butter or peanut butter that you spread across it.

For breakfast today, I made French toast using two slices and I had a little trouble with a little-too-thin piece of bread absorbing the egg mixture and holding together, but it only broke into two pieces when I started to lift it from the soaking pan.  It did not alter the taste of the French toast in any way, so it was still a win.

This bread would also make excellent bread crumbs for making anything that requires them.  You could add additional ingredients, such as sugar substitute, cinnamon and chopped fruit (watch the carbs on that) to make a very tasty fruit bread.  One of the things I want to try with the next loaf that I make is adding yeast to it since this isn’t really a yeast bread, even though it has yeast flakes in it.

My silicone bread pan is slightly larger than the 9”x5” pan suggested in the instructions so the loaf is slightly flatter than the one pictured on the package, so I think it would be a regular-sized loaf in a normal bread pan.

Disclaimer:  I have not received any promotional items to review and no one from any of the companies whose products I review have asked me to do so. I have purchased the product and am giving my honest opinion about it. Should any company send me a product to try, I will state it up front and will still give my honest opinion.