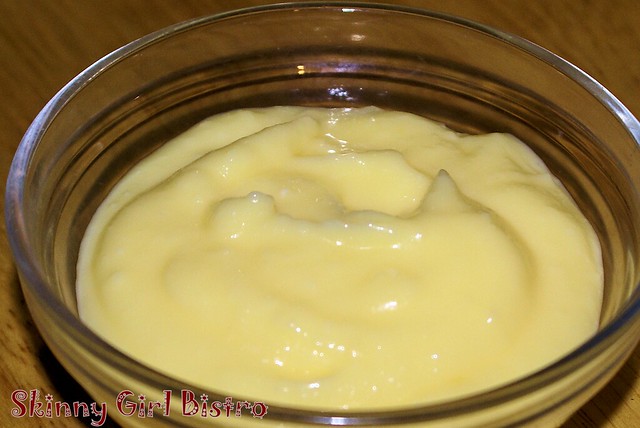 Lemon curd is one of those delicious and versatile fruit jams that can just make a scone extra delicious or become a yummy filling between cake layers. Or just mix it in with vanilla yogurt to make a delicious treat. This low carb version is easy to make. Thanks to low carb sugar alcohols, like Xilitol and Sorbitol, they are really sugar free and taste absolutely wonderful. I use Ideal sugar, but there are many brands.  Some  groceries and health food stores carry these. You can also use Stevia, if you prefer.

I just made a batch of lemon curd for the niece-in-love for her birthday since it’s a favorite of hers, so it seems like an ideal time to share this recipe.

If you start with fresh lemons, it will take about three average-sized lemons to make 1/3 cup.  Grate the lemon zest first.  Then roll the lemon on a counter to break down the pulp inside and make it easier to squeeze the juice out.  Cut in half, remove as many seeds as you can, then squeeze  the juice into a bowl.  Scrape out some of the pulp after squeezing.  Remove any seeds that got into the juice.  Put the juice and pulp into a food processor and pulse a few times to get it smooth.

Bring water to a boil in the lower pan of a double boiler or in the larger of two pots that will stack one in the other. Reduce to a simmer and whisk eggs, sugar, and lemon juice in the top pot until it’s mixed well. Make sure to break any lumps in the mixture as you are stirring.

Continue stirring until it thickens, about 8 to 10 minutes.  This does not have to be continuous, but you do have to stir frequently.  Remove from heat.  If there are lumps, press through a mesh strainer to remove them.  Fold in butter and lemon zest until they are completely mixed into the curd. Cover with plastic wrap and let it cool in the fridge.

Put in a jar, refrigerate and use with scones, muffins or toast, or whatever inspires you.  Keeps from two to three weeks in the refrigerator, if it lasts that long.

Makes a little over 1 cup – about 16 one tablespoon servings

As I was slathering my morning muffin with Pumpkin Butter this morning, I realized that I had not added this simple and delicious recipe for the low carb goodness of this butter to my blog. It simply needs to be shared. If you love the taste of pumpkin pie, this is just for you! This recipe is adapted from one I found on the web and I simply made it low carb and added a few more spices. This is a refrigerator jam, so you do need to eat it within a few months… if it lasts that long! In addition to putting it on toast or muffins, you can mix it with vanilla yogurt (I use Carbmasters) or mixing it with soft cream cheese and whipped topping for a quick pumpkin parfait.

Let cool, then spoon into a canning jar, put on lid and store in the refrigerator.

Makes about 30 servings – 1 tablespoon each

Tip: This is a refrigerator butter. Keep pumpkin butter refrigerated and use within 6 months. When I was a kid, we used to travel across the southwest on vacation every other summer. Among the stop points along the way in many states was a Stuckey’s Store. They had gas, food, souvenirs, turquoise jewelry and cactus candy. In spite of having looked at it many times, I never once tried the cactus candy. So now, when presented with a few cactus pears from the volunteer cactus in my yard, I thought I would make cactus marmalade before tackling a candy.  PK had a recipe her mother used to make prickly pear orange marmalade. It sounded good.

Learn From My Mistakes

Well, the first try didn’t go too smoothly. I picked the pears carefully using tongs and a big bowl, brought them in and used tongs to hold the pear while I burned the thorns off. I even thought that prickly pears should be purple, but they felt a little soft to the touch, so I cut them up, as one preparation instruction said I could and popped them into the food processor to reduce them to pulp and juice. Except there was very little juice at the end. I put them on the stove and boiled them with water, but the result was about 1/4 cup of ugly brown liquid that had no flavor. The pears need to change color, which in turn meant getting ripe. Not one of the articles I read on the prickly pears stated that they should be completely purple or deep orange or whatever color they change to from green. Mine were on the plant so long that I thought they must not change colors. Since it was turning to winter and they still hadn’t turned but were shriveling up slightly, I thought they must not change colors. Scratch the first attempt.

I started checking the markets and found one that had some of the pears in and they were half purple already. I let them sit about a week in a brown paper bag until they were completely purple and soft. The purchased ones already had the thorns burned off, but I still used precautions in handling them, in case there were tiny hair-thin stickers on them. You should use gloves when handling them or use a fork to hold them while cutting. To prepare, cut the ends off each end of the pear, then run a knife from one end to the other cutting under the skin. You can then carefully peel it back to reveal the pear inside.

This attempt came out pretty good. I thought the oranges made it bitter when I tasted the jam while cooking and I threw more sugar substitute at it. But once I tasted it after it was cooled down, using a teaspoon or so in with a cup of vanilla yogurt and whipped cream, I didn’t notice the bitterness, so perhaps the oranges need time to absorb the sweetness into the skins and pithy part. I also thought a thin skinned orange, rather than a navel orange, might be better so may try it with the little cuties oranges.

Now to the recipe. This can be used to make enough for canning, but I don’t include any canning instructions. This recipe makes about three 8 oz. jars of marmalade. You can double it to make more. You can also buy the prickly pears, peel them. reduce them to a puree, then put them in a plastic bag and freeze it to use later. Just don’t forget you have it in the freezer, as I sometimes forget things, and they end up being tossed out because they are found after three years. This recipe is adapted by me for low carb and I added a little ground clove to it. I used LC Foods Cranberry Sauce Mix to thicken it. You can just use a sugar substitute. The amount is in parentheses. If you don’t care about it being low carb, feel free to use sugar.  It will take two cups or more. One recipe suggested one cup of sugar per one cup of fruit mix. I think that’s too sweet.

Cut off ends of the oranges, then slice very thinly, tossing away any seeds. Place in a bowl with 2 cups of cold water and allow to stand for at least 3 hours. (I soaked them overnight.) Pour orange water into a bowl, then put orange slices in a food processor to chop into smaller pieces.

Cut off ends of cactus fruit, then peel. Puree in a food processor then push through a small colander or sieve to get rid of the seeds. Combine with the orange juice and orange slices with orange water in a heavy sauce pan and bring slowly to a boil.

Turn heat to high and boil quickly for 5 minutes, skimming off any froth that rises to the surface.  Stir in the sugar, clove and lemon juice. Bring up to a boil again, lower the temperature to a medium heat and continue boiling and skimming until mixture thickens to almost a jam consistency. Taste to make sure it is sweet enough. Add more sugar if necessary. It will thicken more as it cools.

Prepare jars by and lids by running  them through your dishwasher to clean and heat the jars. Spoon marmalade into jars, leaving 1/2 inch at the top for the seal.