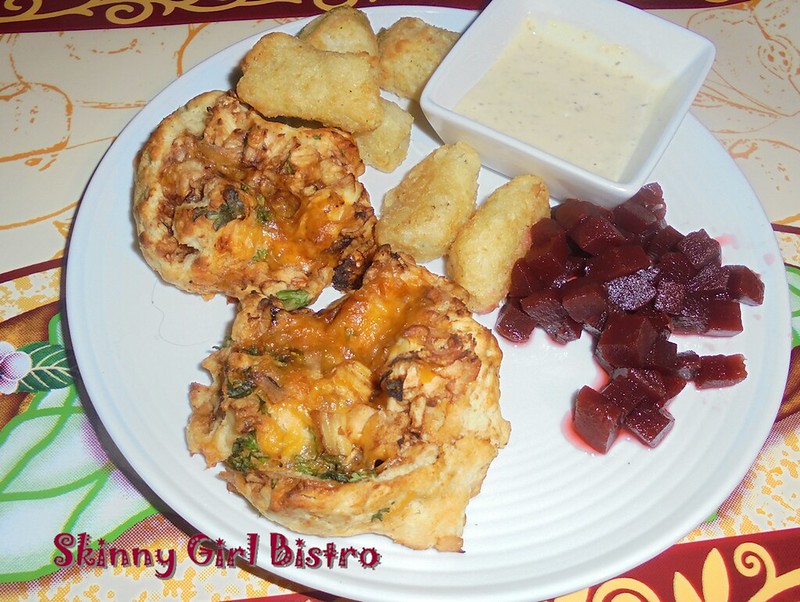 Want a low carb variation of the BBQ Chicken that tastes great and is pretty easy to do? To make these, I used Carbquick from Tova Foods. You could also use Bakesquick from Dixie Carb Counters. If you use other flours, they may not hold together as well and you’ll need to add butter and baking powder. This uses precooked rotisserie chicken, which makes it a great way to use any extra chicken.

You can order either Carbquick or Bakesquick from Netrition.com or from Amazon. It may be a little higher from Amazon, but if you have Prime, you may save on the shipping.

Preheat oven to 425 degrees (F.) Prepare a baking pan with either a silicone mat or parchment paper.

Mix the Carbquick in a large bowl with about 1/4 cup of water. Add enough that it pulls together into a ball, but don’t get it too moist. It will roll out better if it is a stiff dough. Form the dough into a 5-inch x 3-inch log, then put in on a silicone mat or wax paper covered board. Place a sheet of wax paper over the top and press it into a rectangular shape. Use a rolling pin to roll it out to about 10 inches long by 6 or so inches wide.

Put BBQ sauce in a cup and use a basting brush to spread about half of it over the top of the biscuit dough. Add the rest to the diced or shredded chicken. Spread the chicken evenly over the dough, allowing a slight edge on each side for rolling the dough. Top with chopped onions, cheese, and sprinkle on the parsley.

Roll the dough on the long side to form a roll-up. The dough may break in places, so pat it back together as you go. If it becomes difficult to roll, then pull the other side to meet the rolled side and press together to seal. Cut the roll into 8 slices. 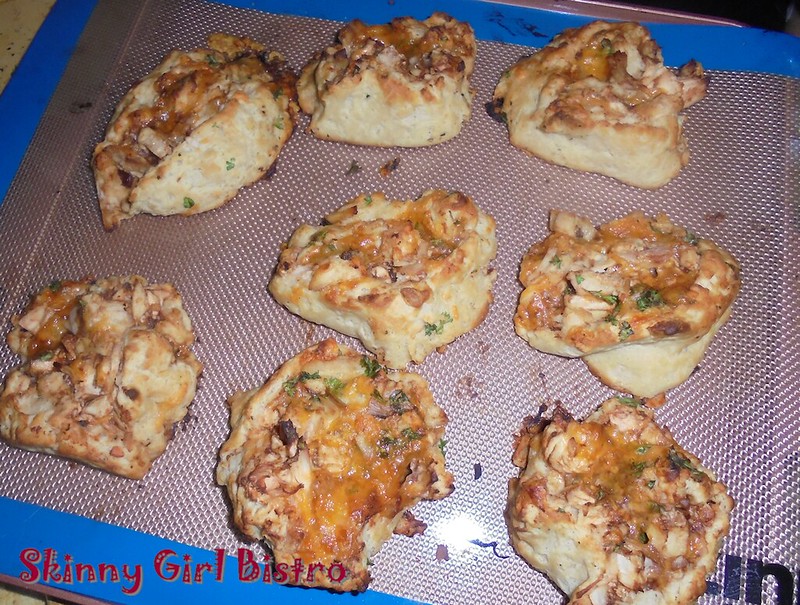 Place slices flat with the filling up on the prepared baking sheet. Bake for 15 to 18 minutes until they are golden brown and the cheese is melted.

Let cool about 5 minutes, then serve with a poblano ranch dressing or more BBQ sauce. Makes 4 servings of two rolls each. 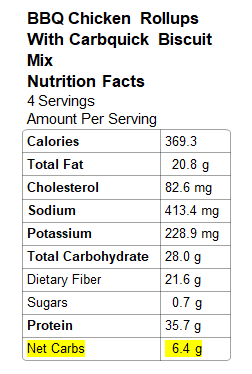 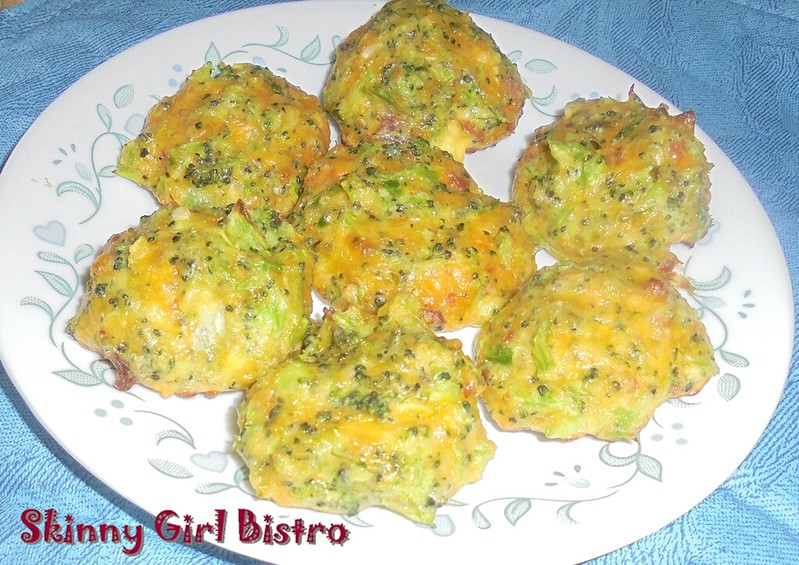 Recently, this recipe came around on my Facebook feed as one of those tasty, simple-to-make appetizers that work well for a party. The original recipe said to fry them in fryer– you can do that if you’d like, but I wanted mine to be a little lighter and without the extra oil flavor, so I decided to bake them.

To make this low carb required only one change, swapping out regular flour for low carb flour. In my case, I used Bakesquick, but you can use whichever one you prefer, such as almond flour or CarbQuick.

While I simply dropped my batter on a parchment paper, you can also put these in mini cupcake pans with papers so they retain a more compact shape. This is a versatile recipe and you can easily swap in cauliflower for the broccoli, add peppers, or other spices to it to personalize your bites.

Preheat oven to 375 degrees (F.) Prepare a baking pan with parchment and spray with oil.

In a bowl, put all the ingredients and mix together well. Use a small scoop to form balls and place each on the parchment-covered baking pan.

Cook for 15 to 18 minutes until golden brown.

Remove to serving plate and put out a bowl of Ranch Dressing for a dipper. 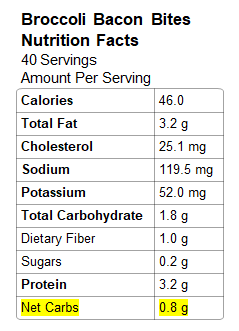 I’ve only eaten hummus a few times and liked it okay. The dippers were the important part to me. Recently, I saw a recipe in a Martha Stewart Living magazine for a beet-based hummus. This is great because it reduces the carbohydrates a whole bunch since chickpeas are pretty high.

So I made up a batch with a substitution in the ingredients. The original called for harissa oil, which is a hot pepper oil, and I substituted in Asian chili paste. I soon learned that the recipe crested almost four cups of hummus. It will keep in the refrigerator for up to 3 days. Time for me to see if it will freeze. Anyway, unless you’re making this for a party, you’ll probably want to go with a half-size version, which is the recipe below. This will make about two cups of it.

I like beets, so I am quite pleased with the flavor. I only tried the red beets but will be looking for golden beets the next time. They are roasted beforehand, so if you make an extra beet, they are delicious right out of the oven.

Peel and chop beets into 1-inch pieces. Line a sheet of foil with parchment paper and put beets on the parchment. Drizzle with olive oil and sprinkle with salt. Fold the foil over the parchment and beets to make a packet and crimp the edges to seal. Roast about 1 hour until the beets are fork tender. Unwrap and let cool completely.

Once cooled, place the beets in a food processor with tahini, lemon juice, and garlic. Process to a coarse paste, about one minute, then drizzle the 2 tablespoons olive oil through the feeder shoot on the top while running the blender. Process another two minutes until smooth. Season with salt and pepper, add chili paste and mix it in, then transfer to a bowl and let it sit thirty minutes.

Tip: The original recipe said to use parchment-lined foil, which I didn’t know was a thing. I had foil and parchment, so I just put a sheet of parchment on top of the foil. Since then, I’ve discovered Reynolds did have a line of it that was based on a Martha Stewart product. The main reason for it was to put a layer of paper between the food and the possible taste from the foil. Anyway, the parchment-lined foil has been discontinued although you can still pick up a few rolls through Amazon until the merchants run out.

Another tip: If you’d like it spicier, add a tablespoon of chili paste to about 1/3 cup of the hummus. 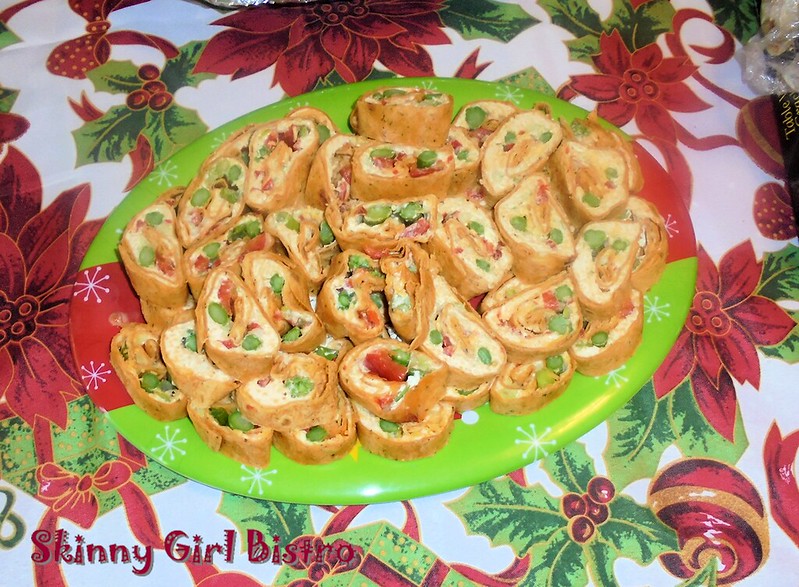 For my second holiday party last weekend, I made these tasty little appetizers that are so easy to put together. If you want to be nice to non-low-carbers, you can make one portion with low carb tortillas and the other three with regular or flavored tortillas. I used the tomato spiced tortillas for mine for the party and made mine with low carb flour tortillas. Either way, these are a delicious and colorful snack.

Bring a pot of water to a boil. Trim asparagus spears and par boil for 3 minutes. Drain and cool.

In a mixing bowl, add the cream cheese, ranch dressing, and cream. Beat with a mixer until blended and smooth. Stir in the cheddar cheese.

Warm the tortillas to make them more pliable. Spread 1/4 of the cream cheese mixture on the tortilla, be sure to go all the way to the edge on the side that will be the end of the roll. Sprinkle 1/4 chopped onions, 1/4 peppers, and 1/4 celery evenly over the tortilla. Place two stalks of asparagus down the center of the tortilla, about 1″ apart. Make sure they go the full length. If they aren’t long enough, cut extra from the additional stalks you prepared.

Beginning at the side you did not spread to the edge, roll the tortilla tightly into a long roll and press the opposite side to secure with the cream cheese edge all the way to the bottom. If you didn’t get enough cream cheese on the edge, use a little extra on the edge to make it stick.

Wrap the roll tightly in aluminum foil. Repeat with the other tortillas.

Chill in the refrigerator for at least two hours. Remove and use a bread knife to cut about 1/2 inch at each end off, then cut the rest into 3/4 to 1 inch slices. It should make about 10  slices per tortilla.

Arrange on a party tray and serve or refrigerate until ready to serve. Recipe makes 40 pinwheels.

Note: It helps to have a container of spreadable cream cheese handy in case you don’t have enough on the edges after you roll the tortilla. 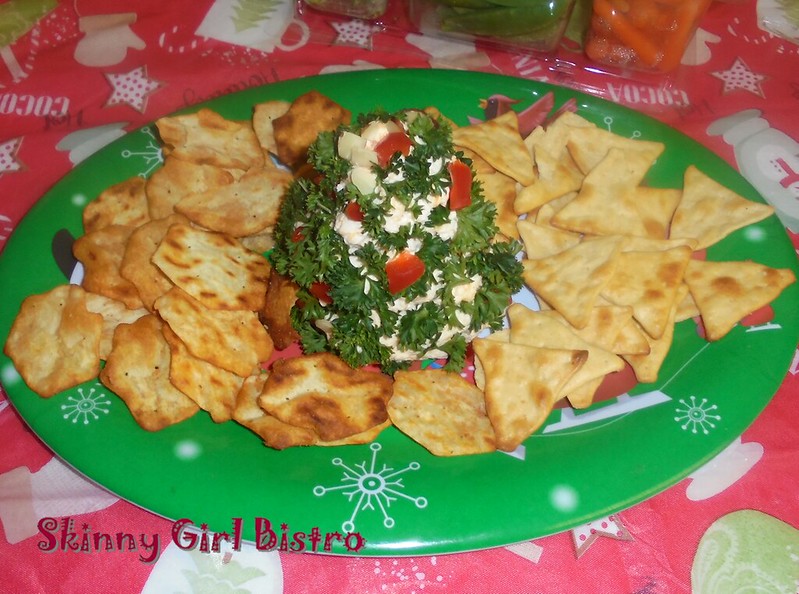 If you’re like me, you can be sorely tempted at a holiday party this time of year.  When you have several to attend and you can bring a side dish or appetizer, you can at least make sure something you bring is low in carbohydrates. This past weekend, I had two parties to contribute a dish and I made two easy to make options that didn’t stress my low carb allotment, although a couple of the other goodies at them did make it tough. I’m posting the recipe for one of them today and I’ll put the other one up later in the week.

This one is based on a recipe from All Recipes with a couple of changes to suit my tastes, such as adding taco seasoning to give it a bit of spice.  It looks really cute on the table and is as delicious as it is attractive. 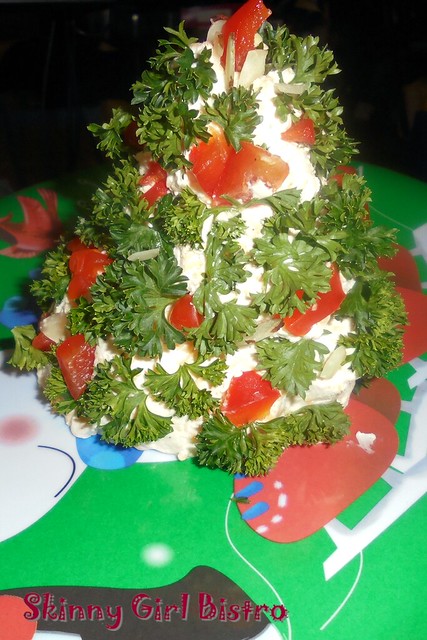 In a large bowl, add cream cheese and use a mixer to whip until creamy. Add cheese, minced onions, taco seasoning and garlic pepper and mix until completely combined. Use a wooden spoon or paddle to pull the cream cheese together into a ball.

Cover a plate with plastic wrap, then form the ball into a cone-shaped tree. Put in the refridgerator to chill until firm, about 1 to 2 hours.

When ready to decorate, cut the bell pepper into short strips and cut out a top decoration, such as a star or a circle, or whatever you would like. Chop the parsley sprigs or pull them off for longer greenery.

Press the parsley into the cheeseball tree to give it a lush green tree look. Add pieces of the bell pepper to form decorations or garlands on the tree. Top with the your topper choice. Add a few sliced almonds to make additional decorations.

Chill until ready to serve, then carefully use a wide spatula to slide under the cheeseball and move to a serving platter. Serve with low carb crackers or vegetables to keep the treat low carb.

Tip: If you’re having a small party or a family dinner, this recipe can be halved easily to serve 8 to 10 people.  Or make a full recipe, split it in half and make two trees for different parties.

Other appetizer recipes for the holidays – click on the images: