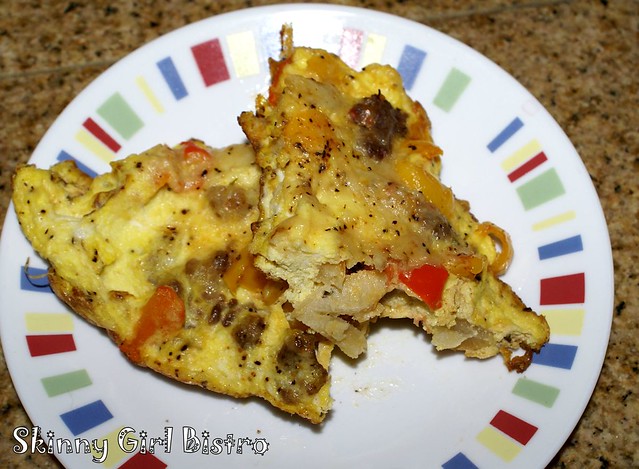 I often hear people say that they get so tired of eggs, which are just a mainstay in the low carb lifestyle.  The egg is super low carb’d, nutritious and very versatile.  There are so many ways to prepare eggs and they are ingredients in many things where they aren’t the star.  If you don’t like the taste of eggs,  then there isn’t much that will hide the egg flavor unless you bake them into custards, flan, cakes and muffins.  But dishes like this one change the basic taste and many more ingredients enhance the experience.

A frittata is like a quiche or an omelet, but is made in a skillet.  It’s the Italian version of a Spanish omelet that is not the same as an American omelet.  Typically, an American omelet is a fluffy, folded over egg with filling ingredients in the middle.  The European version has the ingredients baked into the eggs to make a skillet egg cake, which is essentially what the name means. The flavor is different from the American version and is just as versatile with the added filling ingredients.

Often a frittata will use potatoes or even pasta in the mix.  This version replaces the potatoes with diced turnips, but you can also use Daikon radish, kohlrabi or celery root in it to keep it low-carb’d.  If you aren’t too worried about the carbs in the potato, then use the potato.  You can get creative with the frittata and it makes a great breakfast or brunch dish.  It even serves up well cold or at room temperature so it can make a great summer dinner meal with a berry salad on the side.

In a skillet, cook the sausage until it is browned, separating it into small pieces as you cook. Don’t overcook as it will cook more in the frittata.

If the turnips (or other vegetable) isn’t already prepared, peel it, dice it and cook in boiling water for about five minutes. The little cubes should be fork tender when you poke them.

Break the eggs into a small bowl, add seasoning, salt, pepper and heavy cream and beat with a fork until well mixed and frothy.

Over medium heat, melt a tablespoon of butter in an omelet skillet, then add the sweet peppers and sauté about five minutes. Add the turnips, pico de gallo and sausage and stir to mix into the peppers and butter. Stir the eggs again, then pour into the skillet.

Cook as for an omelet, letting the eggs set, the lift the edges to let the liquid egg in the middle run underneath to cook. Repeat until most of the liquid egg is set. Turn the heat to low and put a cover over the skillet and let cook about three to five minutes. Check to see if the eggs look set in the middle. If so, then sprinkle the cheese over the top and put the cover back on for two or three minutes. Turn off the heat (if using an electric range, move off the burner) and let sit a couple of minutes.

Cut the frittata in two and serve.